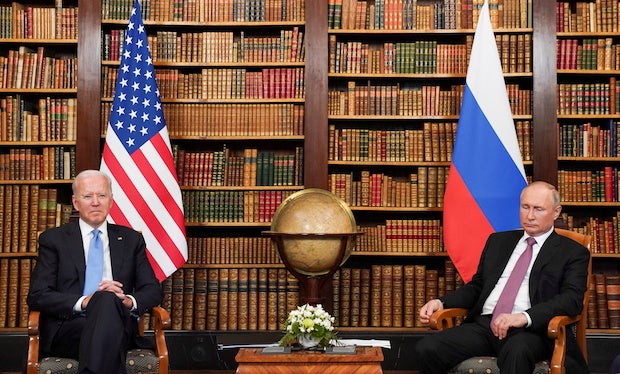 Macron’s call with Putin took place as the United States and other Western nations warned that war in Ukraine could ignite at any moment. US President Joe Biden was due to speak with Putin later on Saturday in another effort at averting hostilities.

Washington ordered most of its embassy staff to leave Ukraine on Saturday, adding to its call this week for private citizens to leave the country as soon as possible.

Additionally, about 150 troops from the Florida National Guard who are in Ukraine to help train Ukrainian forces are leaving the country as the threat of a Russian invasion increases, two US officials told Reuters.

Russia’s military buildup near Ukraine and a surge of military activity have fuelled fears that Russia could invade. Russia denies having any such plans.

Following the French president’s trip to Moscow earlier this week, Macron and Putin on Saturday discussed ways to move forward on implementation of the Minsk Agreements as well conditions for security and stability in Europe, the Elysee Palace said.

“The President of the Republic relayed the concerns of his European partners and allies to his interlocutor. He told President Putin that sincere dialogue was not compatible with escalation,” an Elysee statement said.

Putin will talk later with Biden. The Russian president had requested that their telephone call take place on Monday, a White House official said, but Biden wanted to conduct it sooner.

Washington said on Friday a Russian invasion of Ukraine, including a possible air assault, could occur anytime.

Moscow has repeatedly disputed Washington’s version of events, saying it has massed more than 100,000 troops near the Ukrainian border to maintain its own security against aggression by NATO allies.

Russia, which has accused Western nations of spreading lies, meanwhile said on Saturday it had decided to “optimize” its diplomatic staff numbers in Ukraine, fearing “provocations” by Kyiv or another party.

Moscow did not say whether that meant a reduction in staff numbers but said the embassy and consulates in Ukraine continued to perform their key functions.

“I continue to hope that he will not choose the path of renewed aggression and he’ll choose the path of diplomacy and dialogue,” Blinken told reporters after a meeting with Pacific leaders in Fiji. “But if he doesn’t, we’re prepared.”

In a phone call later with Blinken, Russia’s top diplomat Sergei Lavrov accused the United States and its allies of waging a “propaganda campaign” about Russian aggression towards Ukraine, the Russian foreign ministry said.

Also on Saturday, the Russian military said it had used “appropriate means” to make a US submarine depart from Russian waters in the far east after the vessels ignored a Russian request to leave, Interfax news agency reported.

The submarine was detected near the Pacific Kuril islands in Russia’s waters as Russia conducted naval exercises, the military was quoted as saying.

Putin, jostling for influence in post-Cold War Europe, is seeking security guarantees from Biden to block Kyiv’s entry into NATO and missile deployments near Russia’s borders.

Washington regards many of the proposals as non-starters but has pushed the Kremlin to discuss them jointly with Washington and its European allies.

Still, Biden has long believed that one-on-one engagement with Putin may be the best chance at a resolution. Two calls in December between Biden and Putin produced no breakthroughs but set the stage for diplomacy between their aides. The two leaders have not spoken since, and diplomats from both sides have struggled to find common ground.

Four-way talks in Berlin between Russia, Ukraine, Germany, and France on Thursday made no progress.

Biden’s national security adviser, Jake Sullivan, told reporters on Friday that U.S. intelligence believes a rapid assault on Kyiv is possible and that Putin could order an invasion before the Winter Olympics in China end on Feb. 20. He added that it remains unclear whether such a command has been given.

He said the Russians had gathered sufficient troops near the border to invade the country and that they may initiate an aerial bombing.

Ukrainian officials have tried to tamp down Washington’s assessment an invasion could be imminent.

Several thousand Ukrainians rallied in Kyiv on Saturday to show unity amid fears of an invasion, as Ukraine’s leader told people not to panic and pushed back against what he said was a glut of bleak war predictions being reported in the media.

Still, Washington planned to send extra troops to Poland, Ukraine’s western neighbor, in the coming days to try to help reassure NATO allies, four US officials told Reuters. They are in addition to 8,500 already on alert for deployment to Europe if needed.

More than 30 ships from the Russian Black Sea fleet have started training exercises near the Crimea peninsula as part of wider navy drills, the RIA news agency reported on Saturday.

Ahead of the talks with Putin, Biden spoke about the crisis with the leaders of Britain, Canada, France, Germany, Poland, and Romania, as well as the heads of NATO and the EU. As the tensions have risen in recent weeks, Washington has sought to ensure that its allies would respond in unison if Russia does invade.

150 US troops in Ukraine leaving as Russian threat rises

Thousands march in Kyiv to show unity against the Russian threat

US says more Russian troops mass near Ukraine, invasion can come at any time