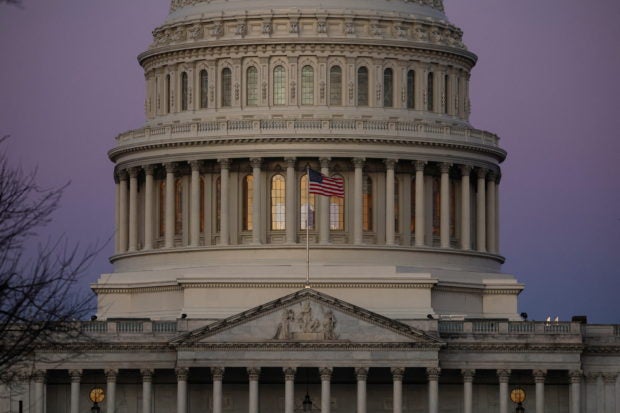 A view of the U.S. Capitol building as the sunrises in Washington, U.S., February 10, 2022. REUTERS/Brendan McDermid

WASHINGTON — The U.S. Senate on Thursday approved a bill that would ban companies from forcing employees who allege sexual assault or harassment to settle their claims with an arbiter without the option of filing a lawsuit.

The bill, which the House of Representatives passed earlier this week, was sent to President Joe Biden to sign into law. The Senate approved it in a voice vote, indicating broad bipartisan support in the narrowly divided chamber.

The Ending Forced Arbitration of Sexual Assault and Sexual Harassment Act was first sponsored by Democratic Senator Kirsten Gillibrand and Republican Senator Lindsey Graham in 2017. It would provide federal protection for employees’ right to sue their employers over allegations of sexual harassment or assault, nullifying clauses in employment contracts that force employees to enter arbitration with their employer instead.

An estimated 60 million Americans are subject to forced arbitration clauses that are “especially common in female-dominated industries,” Gillibrand said on the Senate floor ahead of the vote.

The legislation, she said, would address “a broken system that protects perpetrators and corporations and end the days of silencing survivors.”

The forced arbitration clauses are often are accompanied by a non-disclosure agreement, Gillibrand said.

“Instead of being allowed their day in court these survivors are pushed into a system designed by the same corporations they are challenging,” she said.

Republican Senator Joni Ernst, in a speech on the Senate floor said the bill will ensure that “survivors of sexual assault and sexual harassment … voices will not be silenced.”

She noted that the bill is narrowly written. “This bill should not be the catalyst for destroying pre-dispute arbitration agreements in all employment matters.”

The bill is one of the few pieces of legislation passed in a narrowly divided Senate this year, including Biden’s $1 trillion infrastructure bill and a debt limit increase.