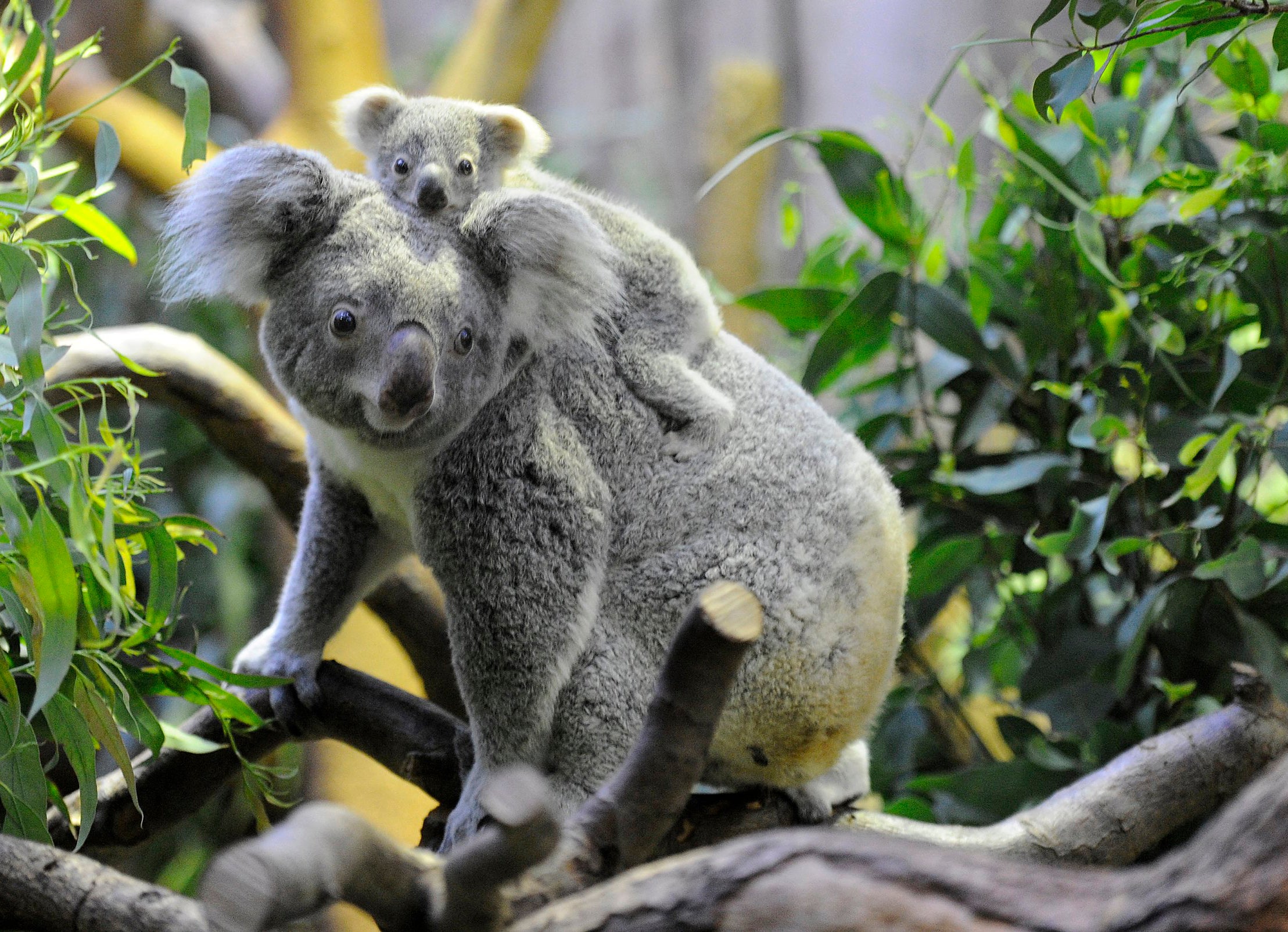 (FILE) Female Koala Goonderrah climbs with her still nameless baby girl on her back in their enclosure at the zoo in Duisburg, western Germany, on December 21, 2011. (Photo by MARIUS BECKER / DPA / AFP)

SYDNEY, Australia — Australia officially listed koalas across a swathe of its eastern coast as “endangered” on Friday, with the marsupials fighting to survive the impact of bushfires, land-clearing, drought and disease.

Conservationists said koala populations had crashed in much of eastern Australia over the past two decades, warning that they were now sliding towards extinction. 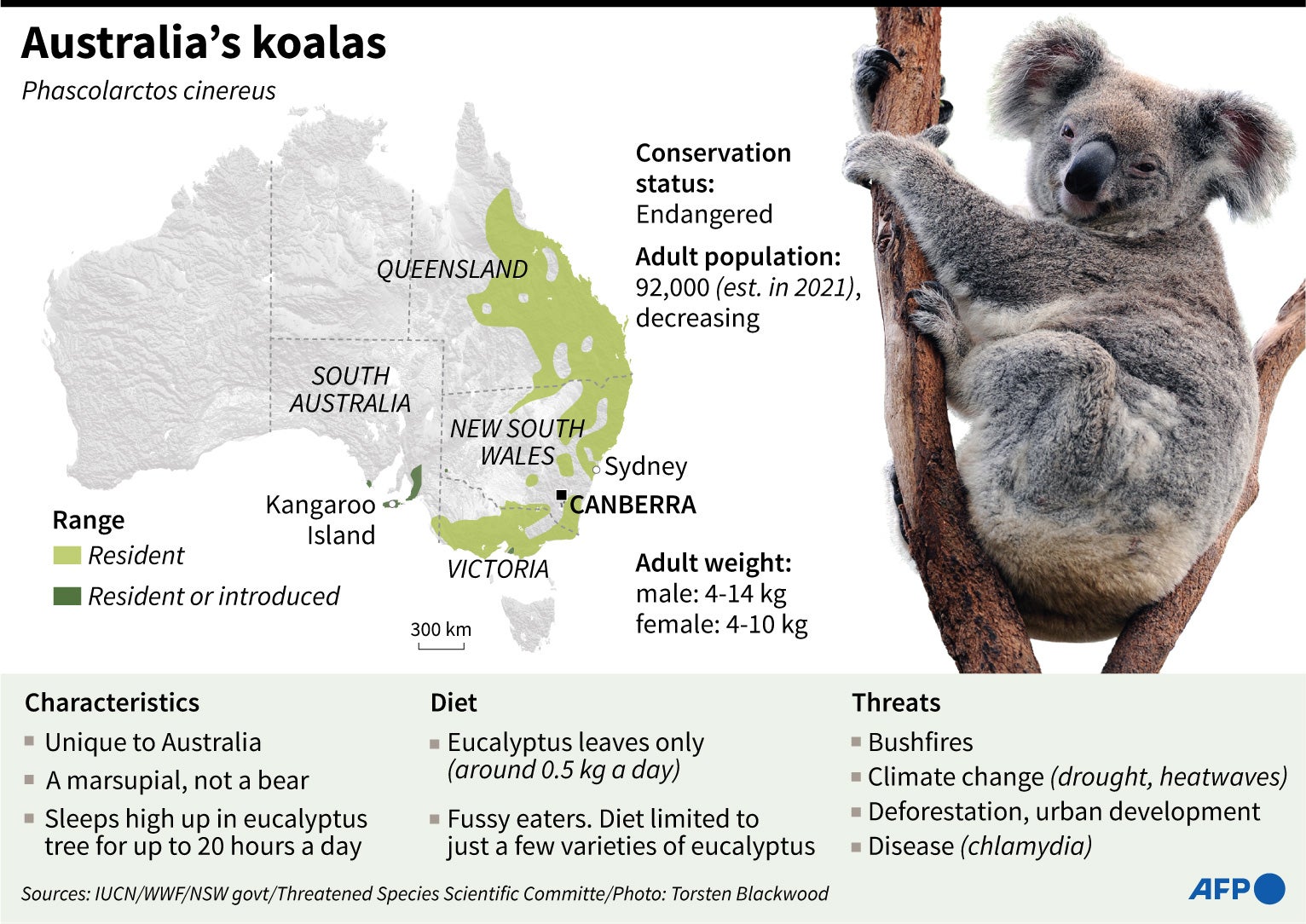 Environment Minister Sussan Ley said she had designated koala populations as “endangered” to offer them a higher level of protection in New South Wales, the Australian Capital Territory and Queensland.

The koala, a globally recognized symbol of Australia’s unique wildlife, had been listed as “vulnerable” on the eastern coast just a decade earlier.

“We are taking unprecedented action to protect the koala,” the minister said, highlighting a recent government promise of Aus$50 million (US$36 million) to protect and recover koala habitats.

Environmentalists welcomed the koalas’ new status but condemned Australia’s failure to protect the species so far.

“Koalas have gone from no-listing to vulnerable to endangered within a decade. That is a shockingly fast decline,” said WWF-Australia conservation scientist Stuart Blanch.

“Today’s decision is welcome but it won’t stop koalas from sliding towards extinction unless it’s accompanied by stronger laws and landholder incentives to protect their forest homes.”

Conservationists said it was hard to give precise figures on koala populations in the affected eastern states.

But estimates by an independent government advisory body — the Threatened Species Scientific Committee — indicated that koala numbers had slumped from 185,000 in 2001 to just 92,000 in 2021.

Alexia Wellbelove of the Humane Society International said east coast koalas could be extinct by 2050 if no action was taken.

“We can’t afford any more clearing,” she said.

The Australian Conservation Foundation said its own research showed that the federal government had approved the clearing of more than 25,000 hectares of koala habitat since the species was declared vulnerable a decade ago.

“Australia’s national environment laws are so ineffective they have done little to stem the ongoing destruction of koala habitat in Queensland and NSW since the species was supposedly protected a decade ago,” said the foundation’s nature campaign manager, Basha Stasak.

“The extinction of koalas does not have to happen,” Stasak added.

“We must stop allowing their homes to be bulldozed for mines, new housing estates, agricultural projects and industrial logging.”

Australia’s koalas had been living on a “knife edge” even before the devastating “Black Summer” bushfires of 2019-2020 because of land-clearing, drought, disease, car strikes and dog attacks, said Josey Sharrad, wildlife campaign manager at the International Fund for Animal Welfare.

“We should never have allowed things to get to the point where we are at risk of losing a national icon,” Sharrad said.

“The bushfires were the final straw. This must be a wake-up call to Australia and the government to move much faster to protect critical habitat from development and land-clearing and seriously address the impacts of climate change.”