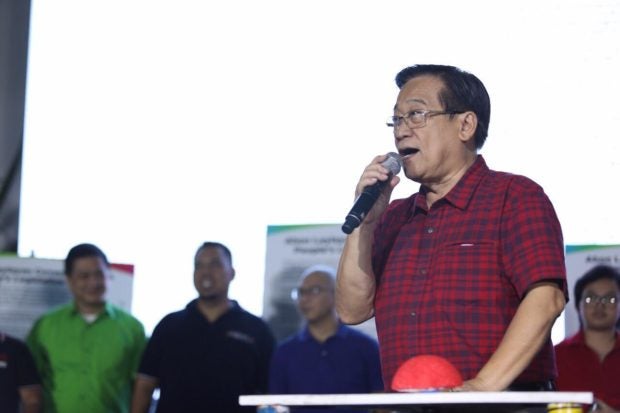 MANILA, Philippines — The need for a candidate to apply for the Commission on Elections (Comelec) approval to conduct a campaign rally before acquiring a mayor’s permit, as well as its other guidelines, is a violation of the Omnibus Election Code, said an election lawyer.

“Since when did the Commission on Elections (Comelec) become a pandemic czar that it could restrict the movement and activities of candidates, political parties, and even private persons exercising their freedom of choice and expression in holding political rallies or activities?” said election lawyer Romulo Macalintal in a statement on Thursday.

Macalintal was referring to Comelec’s Resolution No. 10732 issued on November 24, 2021, which gives an additional requirement for both candidates and non-candidates to first get an “approval” from Comelec to conduct a rally before the applicant could get a Mayor’s permit.

According to Macalintal, this is a “flagrant violation” of Section 87 of the Omnibus Election Code (OEC) and Batas Pambansa 880 or the Public Assembly Act which give sole authority to the mayors to issue such permits.

“There is nothing in the above-cited laws that provides for Comelec’s intervention in granting such permit under any circumstances,” said Macalaintal.

“For sure, this is not one of the powers of the Comelec defined under the Constitution which is limited to the enforcement of laws relative to the conduct of elections,” he added.

Macalintal explained that while the Comelec may be able to find some gaps in the law, it is not its function to supply the gaps since its function is not legislative.

The lawyer also called out other guidelines like “Alert Levels”; the rules on “authorized persons outside of residence” who could participate in such political actions; wearing of face shields with face masks; persons who are not allowed to join therein like those below 18 years of age and those over 65 years of age among others, and said that all these are “clearly not within the power of the Comelec to prescribe as there is no law allowing it to provide therefor.”

He called the guidelines “frivolous” as it placed private persons who are non-candidates in the same level of candidates and political parties as they are also required to seek said approval from the CCC.

“This is clearly a violation of the people’s right to peaceably assemble and their right to freedom of expression,” said Macalintal.

“The Comelec should be reminded that the Supreme Court held in the 2015 case of the Diocese of Bacolod vs Comelec, that ‘the Comelec does not have the authority to regulate the enjoyment of the preferred right to freedom of expression exercised by a non-candidate in this case,’” he added.

Macalintal then urged the poll body to review its guidelines by leaving the sole power to issue permits to the mayors and focus on election related matters instead of intervening in the functions of other agencies of the government — which are not within their functions and powers.

“While Comelec’s objective in assisting in the current public health concern is noble, it will serve our country best if Comelec remains true to its purpose, and not to be distracted by matters that are already handled by other government agencies,” he said.

Only Comelec can stop elections even amid lockdowns – Macalintal

Read Next
More Pfizer vaccine doses for minors aged 5-11 arrive in PH
EDITORS' PICK
‘FPJ’s Ang Probinsyano’ officially ends after nearly 7 years
House energy committee chair Arroyo bats for cheap electricity
A laptop that maximizes your WiFi so you can maximize your productivity
Powered by style, innovation and passion
Red-tagged green activist recalls imprisonment
Authors unbowed after gov’t ‘purge’ of books
MOST READ
Why Tagle is a leading papal contender
Arjo Atayde reveals proposal to Maine Mendoza was ‘more than a year’ in the making
SRA officials should resign after ‘illegal sugar order’ – Zubiri
Gilas gets solid core with Clarkson, Sotto planing in
Don't miss out on the latest news and information.