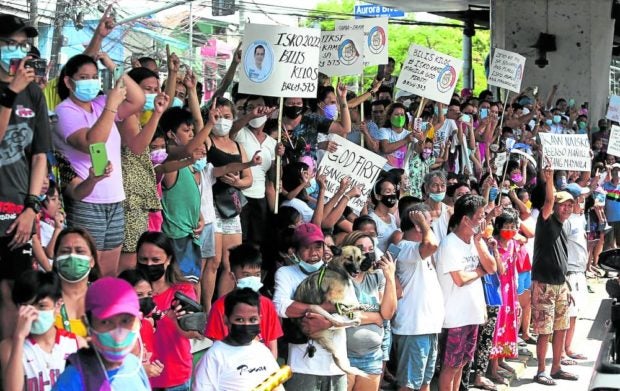 SPOT THE LAPSES: Scenes like these are making health officials worry. More than a few violations of minimum health protocols can be seen in this crowd alone, which gathered on Tuesday to greet the motorcade of Manila Mayor Francisco “Isko Moreno” Domagoso in the city’s Sta. Cruz district. (Photo by MARIANNE BERMUDEZ / Philippine Daily Inquirer)

MANILA, Philippines — The Department of Health (DOH) on Wednesday expressed concern over the weak compliance with and enforcement of health and safety protocols during campaign sorties and other activities for the coming May elections.

Vergeire said the widespread violations carried the potential risk of another surge in COVID-19 cases, especially in areas with low vaccination coverage.

National candidates kicked off their 90-day campaign activities on Tuesday in different parts of the country. For local aspirants, the official campaign period begins on March 25.

Day One of the campaign saw both indoor and outdoor proclamation rallies where the crowd size was controlled, but many supporters were seen not wearing masks or not observing proper distancing.

“We are appealing to our candidates and local officials to please let us try to enforce these safety protocols,” she said, adding that compliance and enforcement should start from among the candidates themselves.

Also on Wednesday, the Philippine National Police noted the failure of some supporters of certain candidates to observe physical distancing and other minimum health protocols.

“[Enforcing health protocols] is a big challenge for the police and other security details,” PNP spokesperson Col. Jean Fajardo said in an interview on ABS-CBN Teleradyo.

But she reported though that the first day of the campaign was “generally peaceful,” with no election-related violence reported. At least three incidents were reported in Mindanao but turned out to be unrelated to the political campaigns when further verified.

PNP chief General Dionardo Carlos earlier said the police would provide assistance only on the security aspect of campaign activities since it is the primary responsibility of the candidates’ organizations to ensure compliance with Comelec rules.

Meanwhile, the Civil Service Commission (CSC) on Wednesday reminded all candidates about the prohibition on the use of state resources for their campaigns, including vehicles issued to government agencies.

While officials—from Cabinet members to congressmen down to the councilors—were “exempted” from the ban on participating in campaign rallies, CSC Commissioner Aileen Lizada issued the reminder on the use of government vehicles, which have red license plates.

Any candidate ignoring the ban may also be cited for violation of the Code of Conduct and Ethical Standards for Public Officials and Employees.