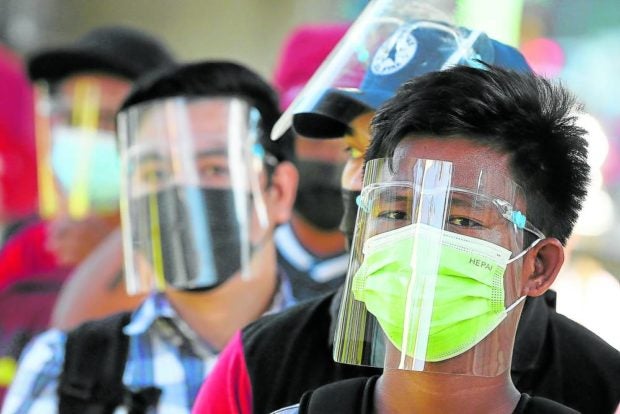 HARD AND FAST RULE: Comelec is sticking to its rule on the wearing of face shields in in-person campaign sorties of national candidates even though this is no longer required outdoors. (Photo by NIÑO JESUS ORBETA / Philippine Daily Inquirer)

MANILA, Philippines — The in-person campaign sorties of national candidates will be limited, right from the start of their official campaign period on Feb. 8.

Through its Resolution No. 10732 dated Nov. 24 last year, the Commission on Elections (Comelec) set restrictions on physical campaign activities, amid the continuing threat of the COVID-19 pandemic.

The guidelines include requiring all those taking part in campaign sorties to wear face shields over their face masks.

Comelec has not amended this rule even though wearing face shields outside the house is mostly no longer required since late November.

“All participants must wear full-coverage face shield[s] and face mask[s] and observe the minimum public health standards at all times,” Comelec reiterated in its social media accounts.

With the election campaign beginning on Tuesday, candidates will also be prohibited from all forms of physical contact such as hugging, shaking hands with people as well as posing for selfies or group pictures.

Candidates were also warned against gathering crowds, entering homes during door-to-door stops and distributing food, drinks “and all other goods and items.”

The Comelec said this also serves as a safeguard against vote-buying.

Also prohibited from physical campaign activities are minors, senior citizens 65 and above, the pregnant and people with comorbidities.

There are candidates, however, who are past 65.

Barangay officials, watchmen and health workers as well as members of the police and military are tasked to monitor the conduct of election campaigns in their areas.

Any violation of these campaign guidelines is considered an election offense punishable by disqualification from holding public office and from voting, as well as imprisonment of one to six years.

Political parties will also be fined P10,000 if their officials are found liable.

The rules will apply to all local candidates when their campaign period begins on March 25.

Furthermore, candidates can only conduct in-person campaigning in areas under Alert Level 2 or 3, with crowd limits in venues and motorcades.

Under the less restrictive Alert Level 2 are Metro Manila and the seven provinces of Batanes, Bulacan, Cavite, Rizal, Biliran, Southern Leyte and Basilan.

All candidates are required to secure approval from the Comelec’s campaign committees at least 72 hours before their in-person campaign activities.

National candidates may seek clearance before the regional campaign committee at the office of the regional election director.

Candidates for mayor, vice mayor and councilors may apply for approval before the municipal or city campaign committee at the office of the election supervisor.

Each committee will be chaired by the election director in the area and will include as members counterparts from the Department of Health, Philippine National Police, Armed Forces of the Philippines and Department of the Interior and Local Government.

Candidates may hold public gatherings, whether indoors or outdoors, at a maximum of 50 percent of a venue’s capacity in areas under alert levels 2 and 3.

For instance, the Philippine Arena in Bulacan province, which has a seating capacity of 51,898, will only be allowed to accommodate as much as 25,949 under Comelec rules.