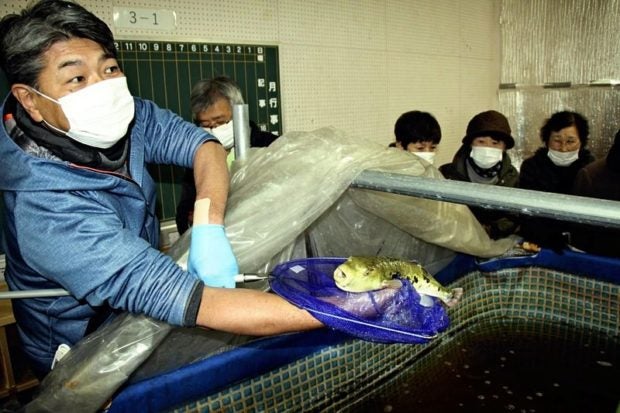 TOKYO — High-end saltwater fish raised in landlocked Shiga Prefecture could soon be making a splash on dinner tables across the country.

A company in Kusatsu, which has developed a unique water purification system, has succeeded in raising saltwater fish without the need of frequent water changing. Fish raised in in the aquaculture system do not run the risk of becoming contaminated with poisons or infected with parasites from the sea, unlike their ocean-dwelling counterparts, and have been attracting inquiries from establishments nationwide.

Aqua Stage, the company promoting the aquaculture, was established in 2018 by Willstage, which has previously purified the water for the Imperial Palace’s outer moat as well as the pond at Byodoin Temple, a World Heritage Site in Uji, Kyoto Prefecture.

Since 2019, the company has been cultivating thousands of fish such as tiger pufferfish, eels, and flatfish in tanks set up in plastic greenhouses in the mountains of Otsu and Koka cities. Initially, the company planned to start shipping the fish to hotels and restaurants in 2020, but plummeting demand amid the outbreak of the novel coronavirus prompted the company to pursue alternative options. Currently, Aqua Stage is only shipping their fish to shareholder restaurants on a trial basis and is aiming to cultivate more in-demand species.

As part of their pivot, the company last spring filled 15 water tanks each measuring 4.5 meters long, 2.2 meters wide, and 85 centimeters high with artificial seawater in a classroom at a former Koka elementary school building, and started cultivating thread-sail filefish for the first time in addition to tiger pufferfish.

According to Aqua Stage, natural tiger pufferfish eat shellfish and algae in the sea, which results in the accumulation of poisonous substances in their bodies. With their cultivation method, however, fish do not amass such poisons. They also said parasite infections do not occur with their system as water quality is controlled with artificial seawater.

In response to these efforts, they have received dozens of inquiries from companies, local governments and fishing cooperatives across the country asking about business tie-up opportunities.

In December last year, local residents were invited to a fish farm in Koka, where they were shown saltwater specimens that included 50-centimeter long flatfish, tiger pufferfish about 30 centimeters long, and freshly hatched thread-sail filefish swimming gracefully in a tank.

“In the future, we would like to try our hand at [raising] sea urchins, hamaguri clams and other fish,” Hiroshi Otani, 54, president of the company, said. “While we are being driven into a corner by the pandemic, we are now in an era where food safety is more important than ever, so I want to carefully assess the situation and make the most of the value of fish and technology.”

Unlike aquaculture conducted on the surface of the sea, which can be difficult for newcomers to enter because of fishing rights regulations, the business of cultivating marine products on land has many advantages, such as not being affected by red tides and other aspects of the ocean’s natural environment.

As a result, land-based methods of raising saltwater fish have been spreading throughout the country with the participation of companies across a wide range of industries.

Adored and endangered: the complex world of the Japanese eel