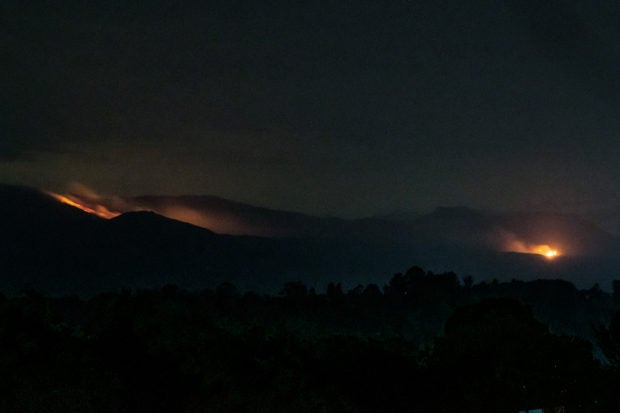 Fire is seen at Aberdare national park on February 7, 2022. AFP

The blaze broke out on Saturday night, according to an official working for Kenya Wildlife Service (KWS), the government body in charge of national parks, who said the fire was “moving very fast”.

“It is on the grasses, it is spreading and very windy,” the official told AFP on condition of anonymity, explaining that he was not authorised to speak to media.

“We have mobilized the community and staff around and today they have really tried their best… it is only that they were overwhelmed.”

The park’s name was etched in history when Britain’s Elizabeth II, then a princess on a visit to Kenya, received news of her father’s death while staying at the Treetops hotel, a remote game-watching lodge built high into a tree in the Aberdare forest.

Rhino Ark, a conservation charity in Kenya, said on Twitter that it had deployed helicopters to conduct aerial surveys of the area to estimate the extent of damage to the forest cover.

The Mount Kenya Trust, a body set up to conserve the country’s forests, said Sunday that a team had “headed up to help with the bushfires in the Aberdares.

“They will camp and hit the fires at first light,” it said on Twitter.

A team of 10 MKT rangers and the Northern area supervisor are headed up to help with the #bushfires in the #Aberdares. They will camp and hit the fires at first light joining the @RhinoArk's AJSU and @kwskenya in the area#AberdaresOnFire #EburuOnFire #emergencyappeal

The park lies some 100 kilometres (60 miles) north of the capital Nairobi.

Located in the Aberdare mountain range, the park is home to spectacular waterfalls and lush bamboo jungles as well as a variety of wildlife including leopards, elephants and critically endangered black rhinos.

The Aberdares are the third highest mountain range in Kenya, reaching a summit of just over 4.000 metres (13,123 feet).

In recent days, concern has grown over a contentious proposal before parliament which could allow politicians to determine if public forest can be carved out and handed over to private interests.

The amendment to the Forest Conservation and Management Act –- reforms passed after decades of rampant land clearing — has roused significant community anger and sparked fears that it could result in unchecked logging and environmental destruction.