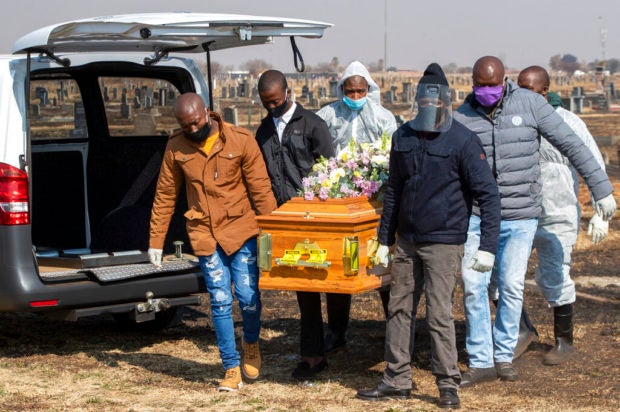 Family members and funeral workers in a protective gear, carry the coffin of nurse Duduzile Margaret Mbonane who died from COVID-19, during her funeral, in Thokoza east of Johannesburg, South Africa, Thursday, July 23, 2020.  (AP)

JOHANNESBURG — Global hot spot South Africa is seeing a “huge discrepancy” between confirmed COVID-19 deaths and an unusually high number of excess deaths from natural causes, while Africa’s top health official said Thursday the coronavirus is spreading there “like wildfire.”

A new report by the South African Medical Research Council, released late Wednesday, shows more than 17,000 excess deaths from May 6 to July 14 as compared to data from the past two years, while confirmed COVID-19 deaths have surpassed 6,000.

“The numbers have shown a relentless increase — by the second week of July, there were 59% more deaths from natural causes than would have been expected,” the report says.

The council’s president, Glenda Gray, said the excess deaths could be attributed to COVID-19 as well as other widespread diseases such as HIV and tuberculosis while many health resources are redirected toward the pandemic.

Meanwhile, some South Africans are thought to be avoiding health facilities as fears of the new virus spread and public hospitals are overwhelmed.

“The coronavirus storm has indeed arrived,” President Cyril Ramaphosa told the nation Thursday evening as cases surpassed 400,000. He announced that schools would “take a break” for a month to protect students.

South Africa now has the world’s fifth largest caseload. It makes up more than half the confirmed cases on the African continent with 408,052.

One of the country’s nurses was buried Thursday, the latest of more than 5,000 infected health workers across South Africa.

Duduzile Margaret Mbonane died just a month before her retirement, her husband said. She was 59. Colleagues dressed in white stood at her outdoor memorial and recited the nurses’ pledge of service.

Some were scared. “As I speak now, most of our colleagues are so infected,” fellow nurse Lindiwe Yeni said. “We looked after people not knowing. We only find that after two or three days.” She wants a rapid test for the virus.

“The government must assist our nurses with protective clothing,” said Duduzile’s husband, Herbert Mbonane. “Maybe my wife wouldn’t have died if personal protective equipment were made available in time.”

Those on the front lines have been hit hard: The World Health Organization said Thursday more than 10,000 health workers have been infected in its African region, which is largely sub-Saharan Africa.

WHO Africa chief Matshidiso Moeti said she wasn’t able to say how many health workers, the majority of them nurses, have died. She said 41 million items of personal protective equipment are set to begin shipping from China this weekend.

South Africa is “very concerning,” the director of the Africa Centers for Disease Control and Prevention, John Nkengasong, told reporters.

Local transmission of the virus has begun in many countries across the continent, and once it is seeded in vulnerable communities such as slums it “spreads like wildfire, which is what we’re seeing in South Africa now,” Nkengasong said.

The true number of cases in Africa is unknown, as shown by the new report in South Africa, the continent’s most developed country.

Testing remains limited by shortages of supplies, with just 7.2 million tests conducted on the continent of 1.3 billion people. Data collection is incomplete as some people die at home or before being tested. Few African countries were equipped to widely track deaths even before the pandemic.

“Community deaths, we just don’t know how countries are capturing that,” Nkengasong said.

Africa’s case fatality rate remains relatively low at just over 2%, but that measure is weakened if authorities don’t know the real numbers.

As cases climb, the Africa CDC director said a “universal masking of the continent is very important at this critical stage” as some officials in South Africa and elsewhere warn against pandemic fatigue.

Many African countries locked down quickly as the pandemic raced across Europe and the United States, delaying its spread at home. But economic pressures have forced most governments to loosen restrictions, though South Africa this month returned to a ban on alcohol sales to help free up precious hospital beds.

“The continent still, as a whole, has a chance to fight back in a successful manner,” Nkengasong said, pointing out that 37 countries have reported less than 5,000 cases.