WASHINGTON, D.C., United States –  US Secretary of State Mike Pompeo called Thursday on “free nations” to triumph over the threat of what he said was a “new tyranny” from China. 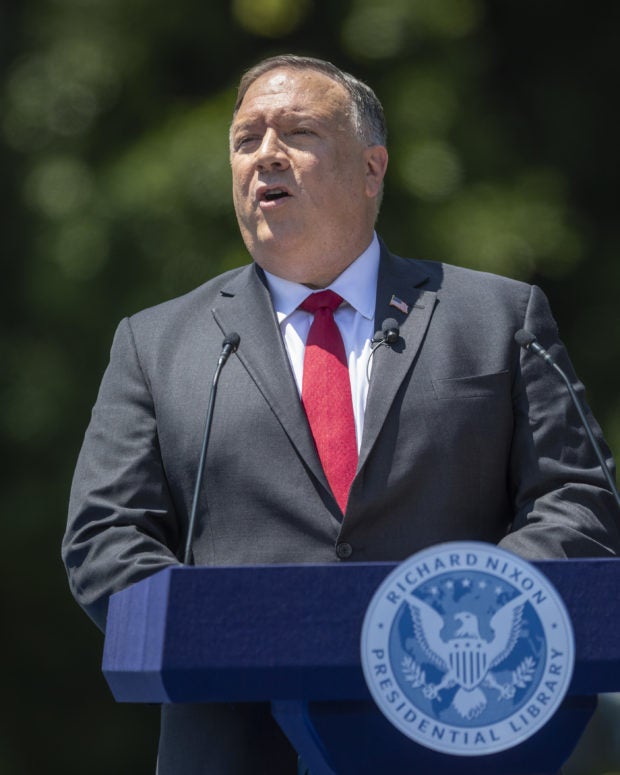 YORBA LINDA, CA – JULY 23: U.S. Secretary of State Mike Pompeo delivers a speech on Communist China and the future of the free world at the Richard Nixon Presidential Library on July 23, 2020 in Yorba Linda, California. The U.S. has ordered the Chinese consulate in Houston, Texas to close by tomorrow. Pompeo told reporters that the decision comes amid China’s “stealing” of intellectual property. The Chinese foreign ministry condemned the closing and said that its embassy in Washington had received death threats. David McNew/Getty Images/AFP

“Today, China is increasingly authoritarian at home, and more aggressive in its hostility to freedom everywhere else,” Pompeo said.

“If the free world doesn’t change Communist China, Communist China will change us,” he said at the Richard Nixon Presidential Library in Yorba Linda, California.

Speaking a day after the State Department ordered China to shut its Houston, Texas consulate, Pompeo laid out a stark view of Washington’s rivalry with Beijing in strident language that recalled the US Cold War with the Soviet Union.

And in an uncommonly virulent attack, he accused Chinese President Xi Jinping of being a “true believer” in the “bankrupt” totalitarian Marxist-Leninist ideology.

– Trump’s hard line –
The speech marked a new level in the hard-line approach toward China by President Donald Trump’s administration.

It was the fourth in a series of major policy speeches by top administration officials, including White House National Security Advisor Robert O’Brien, FBI Director Chris Wray and Attorney General Bill Barr, each of whom focused on one facet of the alleged China threat in ideology, espionage and commerce.

It also comes after Pompeo himself declared China’s geopolitical claims in the South China Sea fundamentally illegal, and after the Pentagon sent two aircraft carriers to that region to underscore the point.

Pompeo said Beijing had taken selfish advantage of US and Western generosity as it implemented reforms and joined the global economy in the past four decades.

He said Beijing had broken international commitments on Hong Kong’s autonomy, on the South China Sea and on stopping state-backed intellectual property threats.

And he said those “failed promises” included not being forthright about the beginnings of the coronavirus outbreak that has now swept the world in a pandemic.

“We can no longer ignore the fundamental political and ideological differences between our countries, just as the CCP has never ignored them,” he said, referring to the Chinese Communist Party.

“The free world must triumph over this new tyranny.”

– New Cold War –
Pompeo made several references to the Cold War that saw Moscow and Washington face off, very tensely at times, around the globe for four decades after the end of World War II.

In dealing with China, countries will have to choose sides “between freedom and tyranny,” he said.

The bilateral relationship between the superpowers has grown more strained this week following Washington’s abrupt order to shut down China’s Houston consulate.

And on Thursday, the US Justice Department announced indictments and arrests of four scientists and medical researchers at US universities.

The four were accused of visa fraud for allegedly lying about their ties to the People’s Liberation Army and the Chinese Communist Party.

Pompeo said the consulate was closed because it “was a hub of spying and IP theft.”

“China ripped off our prized intellectual property and trade secrets, costing millions of jobs across America.”

And on Thursday, he said the charges against the four researchers amounted to “naked political persecution.”