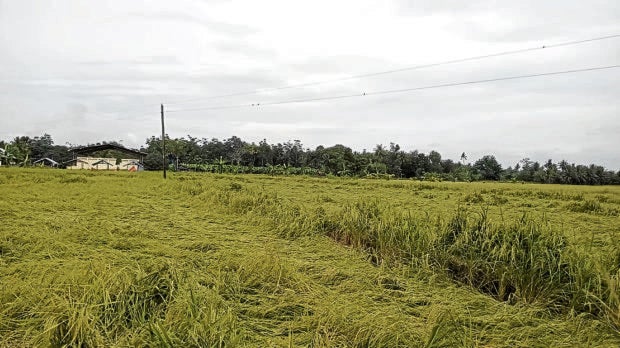 FLATTENED Heavy rains and winds in the last week of January flattened rice fields in 14 villages of Tulunan, Cotabato, causing farmers to incur losses worth at least P143 million, as shown in this photo taken in one of the fields on Thursday. —WILLIAMOR A. MAGBANUA

The heavy rains and strong winds experienced in the town during the last week of January inundated 1,694 hectares of rice fields that were already in the fruiting stage, Tulunan municipal agriculturist Maria Luz Tabacolde said on Friday.

A damage assessment report prepared by the municipal agriculture office estimated that some 8,667.95 metric tons of hybrid rice ready for harvest were lost, valued at P143,183,250.

Tabacolde noted that the cultivated rice were not covered with crop insurance.

The local government has already sought the help of the Provincial Agriculture Office for the provision of relief assistance to the affected farmers.

The Municipal Disaster Risk Reduction and Management Council has also recommended the declaration of a state of calamity in the town so they could use quick-response funds to aid the farmers.

Compounding the hardships in Barangay Bagumbayan was the outbreak of African swine fever (ASF).

Bagumbayan village chief Vanessa Saylama said that as of Thursday, at least 50 hogs were culled by veterinary authorities to deter the spread of the ASF in other areas. The culled hogs were then buried in a grave near the village’s covered court.

Tabacolde earlier raised an ASF alert in other villages of the town.