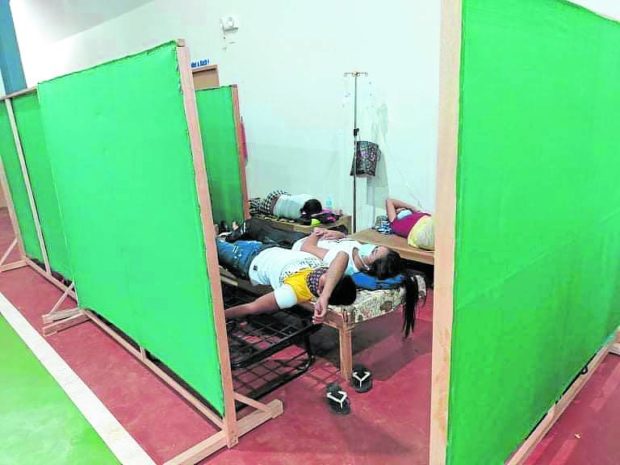 MAKESHIFT HOSPITAL The local government of Caraga, Davao Oriental converts a COVID-19 quarantine facility into a makeshift hospital to attend to over 400 residents stricken were stricken with diarrhea later confirmed to a cholera outbreak. ROMY ELUSFA

CARAGA, DAVAO ORIENTAL — Health officials in this municipality have confirmed that the diarrhea outbreak experienced here early this week was caused by cholera, as the disease spread to six more villages.

Three residents—aged 11 months old; and 36 and 57 years old—died of the disease that has affected a total of 461 people as of Friday.

Dr. Chris Anthony Limen, the municipal health officer, said the laboratory test results from the rectal swabs taken on the patients and tests on the town’s water sources were yet to be released. But he believed it was a cholera outbreak.

“An ordinary diarrhea can fully be treated in two to three days. And it is not life-threatening. But cholera is an acute diarrhea that could be fatal and requires longer days of treatment. Bowel movement could not be stopped and the stool is smelly,” said Limen.

The outbreak, which was first detected in nine subvillages of Barangay Santiago on Jan. 29, had already spread to six other villages: Barangay San Jose, San Miguel and Sobrecarey had two cases each; and Barangay Poblacion, Pichon and Don Leon Balante had one each. The bulk of patients came from the village of Santiago, at 417.

The diarrhea outbreak was blamed on Santiago’s contaminated water source. In November last year, they were reportedly advised to constantly sanitize the facility after a diarrhea outbreak in the village a month earlier. Of the 80 cases last year, one turned out positive for cholera.

Busted pipes and a polluted reservoir have allegedly caused the contamination. Some P20 million was allocated by the provincial government for the water system’s rehabilitation but work has yet to begin.

Limen warned villagers against drinking water from their faucets or using this for washing their utensils unless they boil it for at least 20 minutes.

Limen noted that one patient, who had already been discharged from the Davao Oriental provincial hospital in Mati City, started vomiting again.

Neri Calig-onan, a Santiago resident, said many village folks could not afford purified drinking water and made do with the unsafe supply.

Limen called for donations of purified water for the diarrhea-stricken villages.

He also asked the local government to subsidize the cost of distilled water to be distributed to residents and assign purified water refillers for supply that could be used to clean utensils.

At the makeshift hospital in the town where 150 patients were being treated on Friday, only three nurses were on duty.

Limen said the ideal ratio would have been 15 to 20 patients for every nurse.

He said a request had been made to the provincial and regional health offices, which were also busy preparing for the COVID-19 vaccination rollout for children aged 5 to 11.

Councilor Gerry Dumaan Jr. earlier suggested a suspension of vaccination so health workers could focus on the then diarrhea outbreak.

Limen said they were also running out of intravenous fluids since every patient would consume six bottles in 24 hours. A moderately dehydrated patient would require three to five days of rehydration while a severely dehydrated one would need at least a week.

The makeshift hospital has no standby generator in case of sudden power outages. One generator is used at the municipal health office as emergency power source for refrigerators containing the COVID-19 vaccines, Limen added.