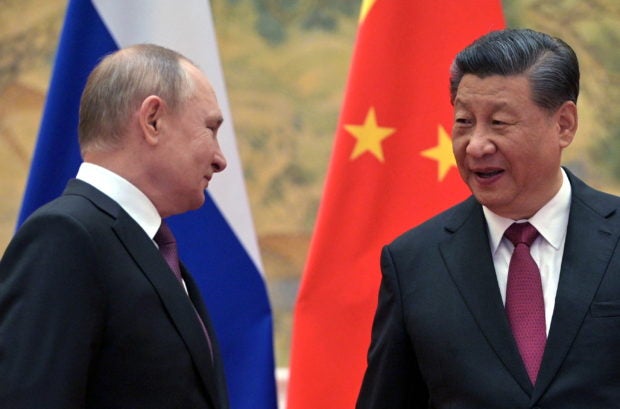 MOSCOW — President Vladimir Putin unveiled a new Russian gas deal with China at a meeting with President Xi Jinping in Beijing on Friday, promising to increase Moscow’s far east exports at a time when Putin is at odds with European customers over Ukraine.

Russia, already Beijing’s No. 3 gas supplier, has been strengthening ties with China, the world’s biggest energy consumer, reducing its dependence on its traditional European energy customers.

“Our oilmen have prepared very good new solutions on hydrocarbon supplies to the People’s Republic of China,” Putin said in a meeting with Xi to discuss closer cooperation.

“And a step forward was made in the gas industry, I mean a new contract on supplying 10 billion cubic meters (bcm) per year to China from Russia’s Far East,” said Putin, who was in Beijing to attend the Winter Olympics.

Putin has accused the United States of stoking tensions over Russia’s neighbor Ukraine, which seeks NATO membership. More than 100,000 Russian troops have amassed near the border with Ukraine. Western countries accuse Moscow of planning an invasion, which it denies.

Russia is Europe’s biggest provider of natural gas, and Western countries are worried that already strained supplies could be interrupted in the event of a conflict. However, the new deal with Beijing would not let Moscow divert gas otherwise bound for Europe, as it involved gas from the Pacific island of Sakhalin, unconnected to Russia’s European pipeline network.

Russian gas giant Gazprom said in a statement that it plans to increase gas exports to China to 48 billion cubic meters a year, including via the newly agreed pipeline which will deliver 10 bcm annually from Russia’s Far East.

Under previous plans, Russia aimed to supply China with 38 bcm by 2025. The announcement did not specify when it would reach the new 48 bcm target.

An industry source told Reuters earlier on Friday that Gazprom, which has a monopoly on Russian gas exports by pipeline, had agreed a 30-year contract with China’s CNPC, with the first gas to flow through the new pipeline in two or three years.

Putin is accompanied by several Russian officials and business executives, including Igor Sechin, head of oil giant Rosneft. Alexei Miller, the head of Gazprom is not in the delegation.

Rosneft and CNPC signed a deal on supplying 100 million tonnes of oil to China through Kazakhstan for 10 years, the Russian company said, effectively prolonging the existing deal.