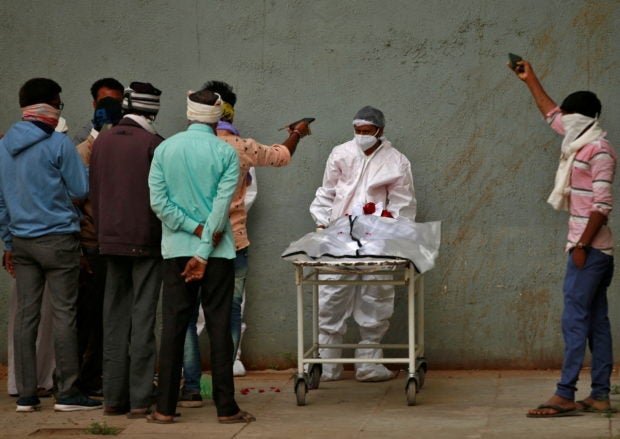 FILE PHOTO: Men take photographs of the body of their relative after he died from the coronavirus disease (COVID-19) at a hospital in Ahmedabad, India, January 24, 2022. REUTERS/Amit Dave

NEW DELHI — India’s death toll from COVID-19 crossed 500,000 on Friday, a level many health experts say was breached last year but obscured by inaccurate surveys and unaccounted dead in the hinterlands, where millions remain vulnerable to the disease.

The country, which has the fourth-highest tally of deaths globally, recorded 400,000 deaths by July last year after the devastating outbreak from the Delta variant of the coronavirus, according to official data. Some experts believe the figures were much higher.

Last month, the Indian government dismissed the study as baseless in a notification saying there is a robust system of birth and death reporting.

India’s states record deaths from COVID-19 after collating data from their districts. In the last few months, several states have updated the number of deaths, some under pressure from the country’s top court. In most instances, authorities said there were lapses due to delayed registrations and other administrative errors.

India is currently in the midst of a third wave of the coronavirus led by the Omicron variant, which some top experts say is already in community transmission although federal officials say most cases are mild.

Last month, the government eased testing norms and told states to drop mandatory testing for contacts of confirmed cases unless they were old or battling other conditions. But, with the number of tests falling, the government issued a revised circular warning states they would miss the spread of the virus.

But, as many infected people took the option of not testing at all, total infection numbers may not reflect the extent and severity of cases, said Gautam Menon, a professor of physics and biology at Ashoka University near the capital who has been tracking the spread of the virus.

According to official figures, India’s overall number of COVID-19 infections has reached 41.95 million, the second-highest globally behind the United States.

India’s cumulative tally of 500,055 deaths on Friday included 1,072 fatalities reported over the last 24 hours, according to the federal health ministry. Out of this, 335 deaths were reported from the southern state of Kerala that has, for weeks, been updating data with deaths from last year.

Kerala, with less than 3% of India’s 1.35 billion population, accounts for nearly 11% of the total deaths reported in the country.

“Some states such as Kerala are recording their backlog deaths under judicial pressure, although not all states have done that,” Menon said.

In Prime Minister Narendra Modi’s home state of Gujarat, authorities have received over 100,000 claims for COVID-19 compensation, of which 87,000 claims have been approved, according to a senior government official.

The number of claims received is nearly ten times the official COVID-19 death toll of 10,545, as per government data.

“There has not been any under-reporting of COVID-19 deaths… The policy for paying compensation is very liberal as per the Supreme Court’s directives, which is why the number of applicants is more than the COVID-19 deaths,” the official said.