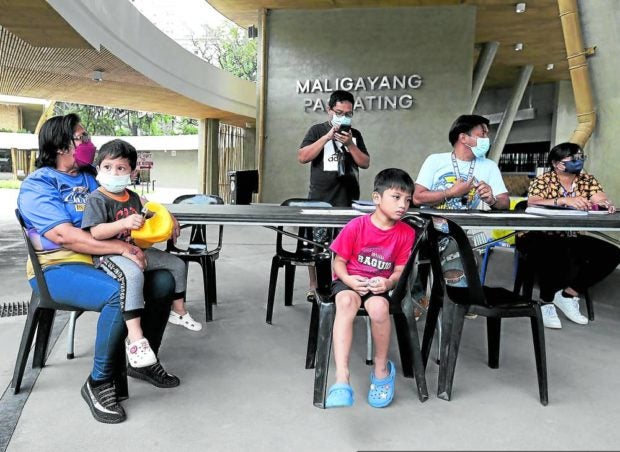 KIDDIE VAX A guardian inquires about the vaccination program for children age 5 to 11 at Manila Zoo, one of the sites chosen for the jabs. The plan has been postponed from Friday to Monday next week because the Pfizer doses will not arrive on time. —RICHARD A. REYES

The government postponed the start of the vaccination of children age 5 to 11 scheduled for Friday to Monday because of a delay in the arrival of the Pfizer COVID-19 shots, the Department of Health (DOH) announced on Thursday.

The announcement was made hours after a mother and a former television journalist petitioned the Quezon City Regional Trial Court to stop the vaccination of children in this age group.

The 780,000 doses of Pfizer’s pediatric vaccine, which were originally scheduled to be shipped on Thursday, would arrive on Friday night instead, the DOH said in a statement without explaining the cause of the delay. They are the first batch of 15 million doses of the Pfizer vaccine for children ordered by the government.

About 15.56 million Filipino children age 5 to 11 are targeted for vaccination against COVID-19.

To ensure “adequate preparation and distribution” of the jabs, the vaccination will begin on Feb. 7, the DOH said.

Girlie Samonte and former ABS-CBN reporter Dominic Almelor petitioned for a temporary restraining order (TRO) on the rollout of the pediatric vaccine by the DOH and to declare it “unconstitutional and null and void.”

They argued that the DOH’s Memorandum Order No. 2022-0041, which serves as an interim guideline on the rollout of the pediatric vaccine, “was issued in grave abuse of discretion and unconstitutional, given all the red flags against [the] administration of COVID-19 vaccines to children.”

The petitioners were assisted by lawyers from the Public Attorney’s Office (PAO), which is headed by Persida Acosta, who led the campaign against the dengue vaccine Dengvaxia in 2017.

Samonte and Almelor said they were “making it clear at the outset that we support the administration’s COVID-19 measures, including vaccination.”“[H]owever, we implead the DOH to respect one’s choice on matters concerning life and health especially if it involves a very vulnerable portion of the population and especially considering the uncertainties in the safety and efficacy of the COVID-19 vaccines,” they said.

The government’s COVID-19 vaccination program, however, is not mandatory and many Filipinos are refusing to be vaccinated.

Almelor said he was fully vaccinated with the Moderna vaccine, but after having “personally researched” on the vaccines for children, he did not want to risk the safety of his 7-year-old son.

It was unclear from the petition whether Samonte had been vaccinated, but the petition cited the Dengvaxia vaccine’s alleged “drastic” effects on her son, including weight loss and being “hotheaded.” In February 2019, the boy was diagnosed with meningitis and has been bedridden since then.

Due to this experience, she joined the petition because she “knows, this time, that COVID-19 vaccines are new, because the COVID-19 pandemic only started in 2019-2020.”

In a joint statement, the DOH and the National Task Force Against COVID-19 (NTF) said they recognized the petitioners’ right to file a case.

“However, as far as the national government is concerned, we remain steadfast in our commitment to protect all sectors of society, which include children and other vulnerable groups. As such, we will proceed with the vaccination rollout for the said age group as planned,” the statement said.

It said the policy of vaccinating children age 5 to 11 resulted from a careful study by health experts and approved in many countries, including the United States. Over 8.1 million children had been vaccinated worldwide with no deaths or serious effects reported among them, it said.

All vaccines approved by the Food and Drug Administration (FDA) have been proven safe and effective, the statement said.

The FDA approved the pediatric vaccine in December and said each dose contains only 10 micrograms, or a third of the shot given to people who are 12 years old and above.

The second dose will be given three weeks, or 21 days, after the first.

Kids as young as 3 are eligible for Chinese-made COVID-19 shots in Argentina (with Sinopharm), Bahrain (Sinopharm), China (Sinovac and Sinopharm) and Hong Kong (Sinovac).

A Pfizer shot is approved for children age 5 and up in Israel, Oman and Saudi Arabia.

In the United States, Pfizer and BioNTech sought authorization this week for the use of their COVID-19 vaccine for children over 6 months and under 5 years old.

Health Undersecretary Myrna Cabotaje earlier said that 168,355 children had been registered for the vaccination nationwide.

According to the DOH-NTF statement, the number signified the “willingness and confidence” of parents to have their children vaccinated.

The DOH has observed a slight increase in the number of COVID-19 cases among children 5 years old and younger, from an average of 35 percent in September to 37 percent in January, according to Health Undersecretary Maria Rosario Vergeire.

The DOH data showed that there were 632 COVID-19 infections among children 5 years and under on Jan. 24-30, compared to 554 in September last year during the peak of the Delta surge.

The DOH-NTF statement pointed out that parental consent was still required prior to the vaccination of all minors.

“Vaccinating them is crucial to achieve our goal of protecting all members of the Filipino family—children, adults and senior citizens,” it said. “This will enable us to continue the safe reopening of schools and other public spaces, as well as to ensure the full economic recovery of our nation.”

Dr. Moriel Creencia, medical chief of the National Children’s Hospital, one of the venues for the children’s vaccination, said it has completed its preparations for the rollout.

She said she expected the children would have more companions on vaccination day to help pacify their fears of injections.

The side effects of the vaccine could include pain at the injection site, fever and body pains, Creencia said.

Candy packs, balloons, headbands and other souvenirs will be given away, he said.

At least 9,653 of the city’s 68,000 age group target have so far been registered for the vaccination at the Laguerta Health Center and the Ospital ng Muntinlupa. —WITH REPORTS FROM LEILA B. SALAVERRIA, JANE BAUTISTA and Inquirer Research