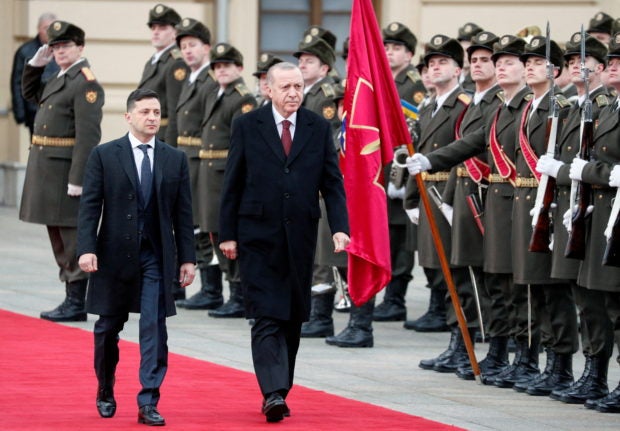 ANKARA — President Tayyip Erdogan is set to visit his counterpart Volodymyr Zelensky in Ukraine on Thursday after pitching Turkey as a mediator to ease tensions with Russia, and an official said he was not picking any sides in the crisis.

The Turkish official told Reuters that Ankara expects tensions to ease after the meeting in Kyiv. On Wednesday, Ankara and Kyiv said they would sign a free trade agreement and other deals.

Russia has denied any plans of invading Ukraine amid concern by many Western nations over its build up of more than 100,000 troops near the border, but has demanded sweeping security guarantees from the West.

Erdogan’s trip comes after visits by leaders of NATO members Britain, Poland, and the Netherlands to Kyiv amid the standoff. Turkey has good ties with Kyiv and Moscow but has said it would do what is necessary as a NATO member if Russia invades.

Ankara offered in November to help ease building tensions, and last month Turkish diplomatic sources said both Russia and Ukraine were open to the idea.

A separate Turkish official, speaking on condition of anonymity, said Erdogan will call on both sides to exercise restraint, and added Ankara wanted to continue its cooperation with both of the “very important” countries.

Turkey’s “approach is not picking one side or standing against one country in the tensions,” the official said. “With Erdogan’s initiative and with some of the messages he will convey, we expect tensions to ease.”

Turkey shares the Black Sea with Ukraine and Russia. Erdogan has said conflict would be unacceptable in the region and warned Russia that an invasion would be unwise.

While forging cooperation with Russia on defense and energy, Turkey has opposed Moscow’s policies in Syria and Libya, as well as its annexation of the Crimean peninsula in 2014. It has also sold sophisticated drones to Ukraine and inked a deal to produce more near Kyiv, angering Russia.

Ukraine’s prime minister said on Wednesday that Ukraine and Turkey would sign a dozen agreements including a free trade deal during the talks in Kyiv.