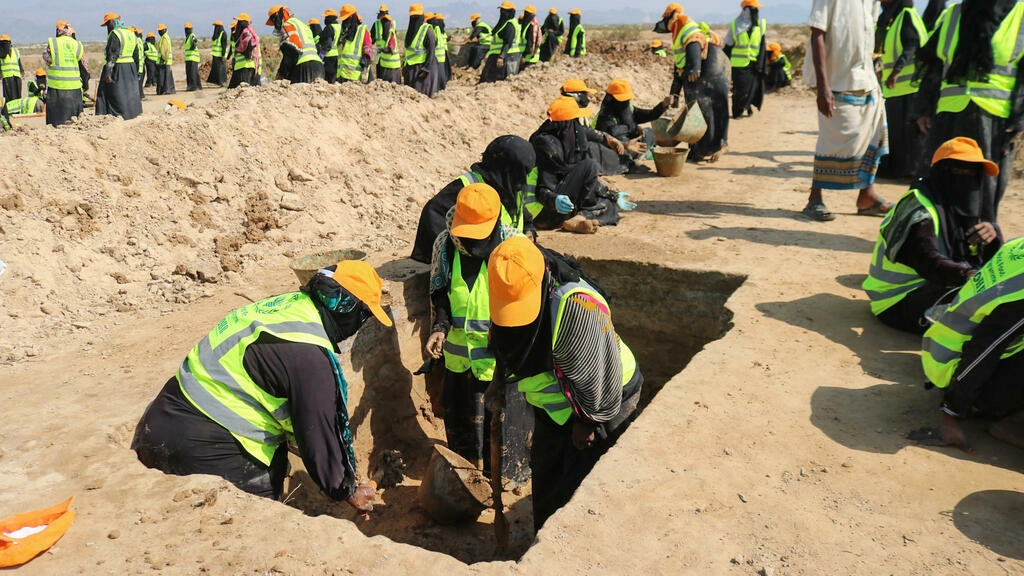 AL MUKALLA, Yemen — Scooping up handfuls of white crystals from coastal pools, a group of women in Yemen harvest salt — a traditional industry proving to be a lifeline after seven years of war.

Zakiya Obeid is one among nearly 500 women who work in the industry in a village overlooking the Gulf of Aden, on Yemen’s southern coast.

“We cooperate and take shifts because it is a sisterhood and we know each others’ difficult circumstances,” Obeid told AFP.

Employment is so scarce that the women work in rotation to allow more people to benefit. She said the women are divided into two groups, with each working for 15 days while the others rest.

In bare feet and mud-spattered abaya robes, the women dig basins at low tide and return when the seawater has evaporated to dredge up the salt for packaging and selling.

The time-honored livelihood has been passed down from generation to generation.

It is now a means of survival, providing many families with their only source of income. The women earn about $100 per month for harvesting the salt and packing it in plastic containers.

Since the formation of the Al Hassi Association for Sea Salt Production in 2020, the women are able to transport the salt to be ground, packaged and sold across Yemen.

“Before then, we used to do the same work but could only sell the salt raw,” Obeid said. “But that is no longer the case, with the association providing us with bags and transport.”

‘Only source of income’

Yemen has been embroiled in a civil war between the government — supported by a Saudi-led military coalition — and Iran-backed Huthi rebels since 2014, pushing the country to the brink of famine.

The conflict has killed hundreds of thousands of people and left millions displaced, according to the UN, which calls it the world’s worst humanitarian catastrophe.

The head of the Al Hassi Association, Khamis Bahtroush, said the women, who produce between 20-30 tonnes of salt every three months, have come to rely on this industry.

“Production is lower in winter than in summer,” he said. “Each bag is sold for approximately 3,000 Yemeni rials ($12)… but we are struggling with inflation and do not have liquidity to give them raises.

“This is their only source of income… they have nothing else. No farms, no livestock.”

The United Nations Population Fund has said the loss of male breadwinners in the conflict has added to the difficulties faced by women.

“The pressure is even more severe where women or girls suddenly find themselves responsible for providing for their families when they themselves have been deprived of basic education or vocational training,” it said.