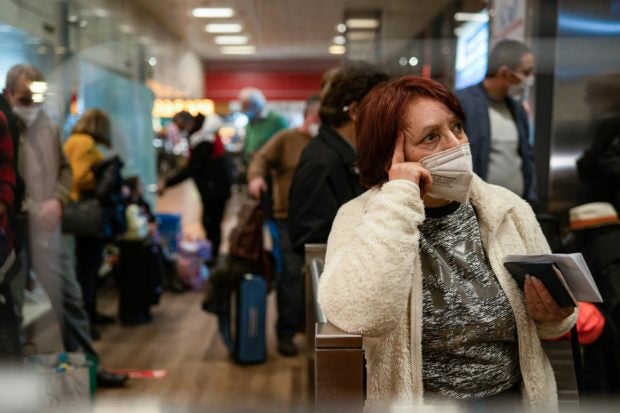 Passengers wait before boarding for the Pegasus Airlines flight departing from the Sabiha Gokcen International Airport for the first time to land in the Yerevan International Zvartnots Airport, in Istanbul, on February 2, 2022. – Historic rivals Turkey and Armenia on February 2, 2022 resumed their first commercial flights in two years as part of cautious efforts to warm their frozen ties. Armenia and Turkey have no diplomatic relations, a closed land border and a deep-seated hostility rooted in the mass killing of Armenians under the Ottoman Empire during World War I. (Photo by Yasin AKGUL / AFP)

ISTANBUL — Historic rivals Turkey and Armenia on Wednesday resumed their first commercial flights in two years as part of cautious efforts to warm their frozen ties.

Armenia and Turkey have no diplomatic relations, a closed land border and a deep-seated hostility rooted in the mass killing of Armenians under the Ottoman Empire during World War I.

But in December, the two countries appointed special envoys to normalize relations, spurred by support from regional powerbroker Russia and Armenia’s arch-foe Azerbaijan.

The push came a year after Azerbaijan used the help of Turkish combat drones to recapture most of the territory it lost to ethnic Armenians in a 1990s war in the dispute region of Nagorno-Karabakh.

A Russian-brokered truce that ended the second conflict removed Turkey’s main objection to talking to Armenia — namely, Yerevan’s support for the local Nagorno-Karabakh government’s claim of independence from Azerbaijan.

The special envoys met in Moscow last month for a “constructive” first round of talks that skirted the issue of Turkey’s refusal to recognize the 1915-16 killings of more than a million Armenians as genocide.

The neighbors agreed to resume flights at around the same time.

The first flight operated by the low-cost carrier FlyOne Armenia landed in a cold and drizzly Istanbul to a warm reception from airport officials, who welcomed passengers with flowers and chocolates.

“We think these flights are important for preserving ties between the Armenian community in Istanbul and Armenia,” FlyOne’s Armenia chief executive Aram Ananyan told reporters after disembarking the flight.

An overwhelming majority of the 50,000-70,000 Armenians in Turkey live in Istanbul, a megalopolis of 16 million people.

‘Positive but not revolutionary’

A flight run by Turkey’s Pegasus Airlines took off from another Istanbul airport for Yerevan a few hours later, watched by a swarm of Turkish and Azerbaijani reporters.

But an AFP reporter said some of the 100 or so ticketed passengers were turned away due to a lack of Armenian visas, which they had expected to purchase on arrival in Yerevan.

“I see Armenia and Turkey as brothers: one part of our family is here as the other is in Armenia,” Turkish passenger Sezar Yilidirm said before boarding in Istanbul.

Fellow traveller Narin Ayvazian, an Armenian living in Turkey, added: “I am sure that more good things will follow, God willing.”

The budget Turkish airline will fly three flights to and from Yerevan a week. FlyOne plans two weekly return flights.

Analysts called the resumption of flights a positive but cautious first step in the difficult journey of normalizing relations.

“This is of course good news but it’s also just a restoration of a previous situation,” Thomas de Waal, a senior fellow at Carnegie Europe think-tank, told AFP.

“The involvement of Pegasus, a regular Turkish carrier, rather than charter flights as previously is a positive step but not a revolutionary one,” he said.

“So though I welcome this very much I would hesitate to give it too much political significance,” said de Waal.

The flights between the two capitals were interrupted when the low-cost Turkish company Atlasglobal, which had several flights per week, filed for bankruptcy in February 2020.

Passengers were then forced to transit via Georgia.

The land border between Turkey and Armenia has been closed since 1993, forcing trucks to travel through Georgia or Iran.

Turkey rages at US recognition of Armenia genocide