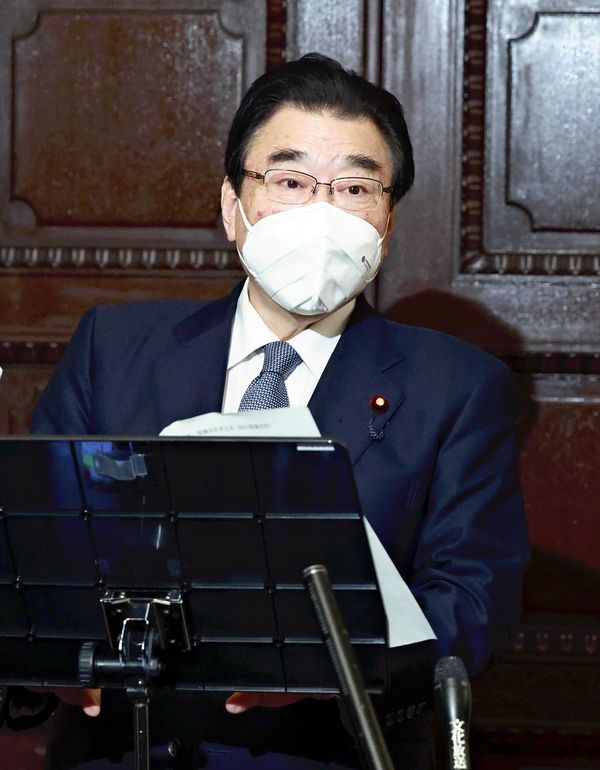 TOKYO — In a bid to accelerate the administration of booster shots against the novel coronavirus, the government will relax the requirements for establishing vaccination sites and raise the maximum subsidy for operating them, health minister Shigeyuki Goto announced on Tuesday morning.

The move came as the third round of vaccinations, which the government believes is vital to tackle the highly contagious omicron variant, has fallen behind schedule.

Companies, universities and other bodies had to anticipate inoculating at least 1,000 people, in principle, in order to apply for permission to set up a venue for the first and second rounds of inoculations. For the third round, however, the minimum number will be lowered to 500.

The Health, Labor and Welfare Ministry made inquiries among companies and other organizations that had set up inoculation sites for the first and second doses of vaccine. but not applied for the third. Many responded that the requirement on the number of people was too strict, prompting the ministry to decide to relax it.

Until now, a subsidy of up to ¥1,000 per inoculation was provided to cover part of the operating costs for vaccination sites established jointly by several small and medium-sized companies. The government will raise the maximum amount, Goto said, with the specific increase to be determined later.

The government will also make it known again that people can get vaccinated at companies and other venues even without the vaccination vouchers distributed by local governments.

Preparations are underway to start booster shots at companies, universities and other venues from March, but depending on the supply of vaccine, inoculations could start at the end of February in some locations.

The government hopes to deliver about 9.6 million doses to such venues by the end of March.

Reservations for the third round of vaccinations have been slow. About 4.08 million people had gotten a third dose as of Sunday, only 27.8% of the 14.7 million the government had expected by the end of January.

The government reached a final agreement Monday to secure enough of the oral medicine Paxlovid, a Pfizer Inc. drug for the treatment of COVID-19, for 2 million people, Goto announced Tuesday.

Goto said he expects supplies for about 40,000 patients to be available in mid-February, after the health ministry approves Paxlovid.

Pfizer submitted an application in January to manufacture and market the drug in Japan. A ministry panel is expected to consider the application and give special approval to the drug in the first half of February.

If Paxlovid is put into practical use, it will be the second oral medicine that can be used for COVID-19 patients with mild symptoms, following Molnupiravir, which is manufactured by U.S. pharmaceutical company Merck & Co. The drug is aimed at curbing the reproduction of viruses within cells, and must be taken soon after symptoms emerge.

Paxlovid is meant for patients with mild to moderate symptoms who are at high risk of developing severe symptoms, such as the elderly and those with pre-existing conditions. In clinical trials, it was found to be effective in reducing the risk of hospitalization and death by 89% in COVID-19 patients within three days of the onset of symptoms. Paxlovid is said to likely be effective against the omicron variant as well.

The drug received emergency permission for use in the United States and was approved in Britain in December.

Prime Minister Fumio Kishida on Monday expressed caution over declaring a state of emergency in Tokyo amid the spread of the novel coronavirus.

“At least at this point, the government is not considering [such a declaration],” Kishida said in the Budget Committee of the lower house Monday, indicating that the government is carefully watching the effects of the quasi-emergency measures currently in place in Tokyo and some other prefectures.