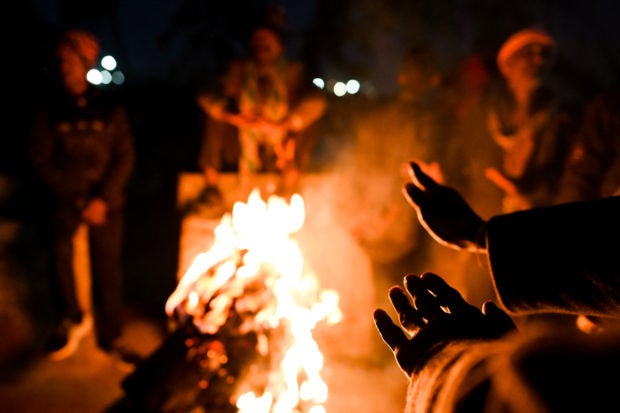 In this picture taken on January 29, 2022, shows homeless people gathered besides a bonfire to keep themselves warm in a wintry evening in New Delhi. (Photo by SAJJAD HUSSAIN / AFP)

The sprawling megacity’s 20 million inhabitants are accustomed to year-round weather extremes, from blistering summer heat to torrential downpours and thick, toxic smog at the end of autumn.

Still, the bracing chill and blustery rains this month have been an ordeal for many, with Delhi on Tuesday recording its coldest January day in nearly a decade.

“There’s no denying that it’s very cold,” 30-year-old Mukesh told AFP from his bed at a homeless shelter on the weekend.

He and a small group of the shelter’s residents have taken to huddling around an improvised wood fire, a scene repeated around the city’s kerbsides each night this month.

“The last ten days have been very cold and especially this past week, there was not much sunshine. We have been worried because we have to try hard to keep warm,” Mukesh said.

Recent figures on homelessness across Delhi are hard to come by, but according to India’s 2011 census, around 47,000 of the city’s residents were sleeping rough.

Activists, however, say that is a vast underestimate. Official figures show the city’s homeless shelters are only able to accommodate around 9,300 people.

Sunil Kumar Aledia of the Centre for Holistic Development, who has worked with Delhi’s homeless population for decades, said the city has seen around 176 deaths from exposure to the cold so far this year.

“Because of these extreme temperatures, many people on the streets die,” he told AFP.

‘This situation is not normal’

India’s weather bureau has told local media that Delhi’s maximum daily temperatures have been between two and six degrees Celsius below normal for most of January.

On Tuesday, just 12.1 degrees Celsius (54 Fahrenheit) was recorded, the lowest January maximum since 2013 and 10 degrees below the long-term average for the month.

The lows have been in single digits for much of the last few weeks.

“This situation is not normal,” said Anjal Prakash of the Bharti Institute of Public Policy, a think-tank that has worked with the United Nations on climate change modellng.

Extreme weather phenomena “are going to be much more frequent and also the severity of these events will (rise) in future”, he told AFP.

The humans of Delhi are not the only ones suffering through the cold spell.

The city’s stray dogs often congregate around markets and as the cold sets in each year, many are put in special jackets and fed hot meals to help them endure the weather.

“This year, we felt the cold a lot more, both me and my dogs,” said Raju Kashyap, who runs an outdoor tea shop and looks after some of the area’s strays.

“But I had to get out of the home and run my stall… I have to come and stand here to feed them because they depend on me,” he told AFP.

Power restored to most in Texas after ‘tragic few days’