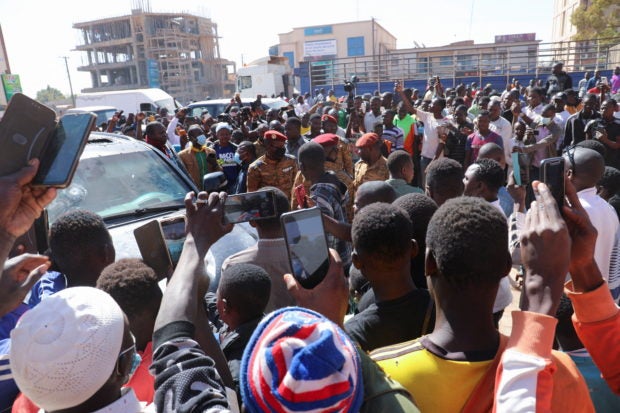 People gather around a vehicle belonging to the presidency after Burkina Faso President Roch Kabore was detained at a military camp following heavy gunfire near the president’s residence in Ouagadougou, Burkina Faso, January 24, 2022. REUTERS FILE PHOTO

PARIS — Nearly 60 “terrorists” were killed in Burkina Faso by local forces alongside French troops on the eve of the January 24 coup in the poor Sahel country, France’s military said on Sunday.

The military successes came just ahead of the putsch that ousted president Roch Marc Christian Kabore, who had come under heavy criticism for failing to contain the jihadist insurgency in the country, where violence has worsened since 2015, especially in the north and east.

“On four occasions between January 16 and January 23, 2022, groups of terrorists were located, identified and neutralized by Burkinabe forces and by (foreign) units… in total nearly 60 terrorists were taken out,” the French military said in a statement.

“We continue the fight against the terrorists in coordination with the partners, the Burkinabe armed forces, who led these operations (with a) very positive” outcome, it said.

Last Thursday, the country’s new strongman Lieutenant Colonel Paul-Henri Sandaogo Damiba, in his first speech since the putsch, said his country “needs its partners more than ever”.

Saying he understood the “legitimate doubts” raised by the coup, Damiba promised to “respect international commitments, notably with respect to human rights” and said the judiciary would remain independent.

The French military statement said that after the latest operations, Burkinabe forces would be able to return to “areas of transit and refuge” for the jihadists where “they have not operated for a long time”.

Militants linked to Al-Qaeda and the Islamic State group began mounting cross-border raids from Mali in 2015.

More than 2,000 people have died, according to a toll compiled by AFP.

The national emergency aid agency says that 1.5 million people, nearly two-thirds of them children, were internally displaced as of November 30, 2021.

The country’s security forces are poorly equipped to face a ruthless and highly mobile foe, adept at carrying out hit-and-run raids aboard motorbikes and pickup trucks.

On November 14, a force described as numbering several hundred men attacked a police base at Inata near the Malian border, killing 57 people, including 53 gendarmes.

On December 23, 41 people were killed when a convoy of traders was ambushed near Ouahigouya, also near the Malian frontier.

The people in these landlocked regions — mostly pastoral nomads — are among the poorest in the world, with little access to education and social services.

With central governments wielding little control over these areas, they have become fertile recruiting ground for jihadist groups.