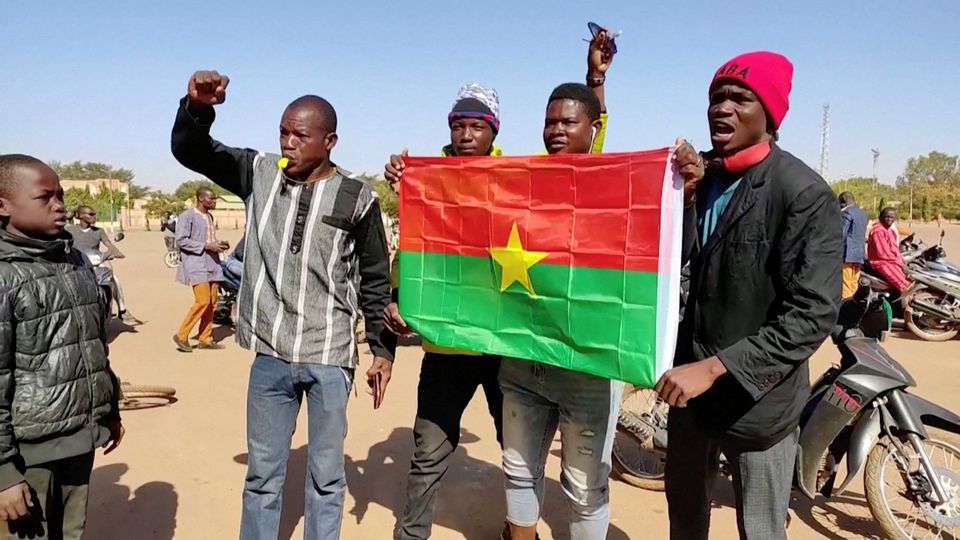 People hold a Burkina Faso flag as hundreds gather in downtown Ouagadougou to show support for the military, in Burkina Faso, in this still image taken from video on January 23, 2022. REUTERS TV via REUTERS

OUAGADOUGOU — Sustained gunfire rang out from military camps in Burkina Faso on Sunday as mutinying soldiers demanded more support for their fight against Islamist militants and protesters ransacked the headquarters of President Roch Kabore’s political party.

The government called for calm, denying speculation on social media that the army had seized power or detained Kabore.

Late on Sunday, it decreed a curfew from 2000 GMT to 0530 GMT until further notice, and issued another statement suspending schools on Monday and Tuesday for security reasons.

A spokesperson for the government said separately that talks were ongoing with the mutinying soldiers.

A spokesperson for the mutineers said they were demanding “appropriate” resources and training for the army in its fight against militants linked to al Qaeda and Islamic State and the resignation of the army and intelligence chiefs.

Frustration in the West African gold producing country has grown in recent months over deteriorating security. The deaths of 49 military police in a militant attack in November prompted violent protests calling for Kabore to step down.

Demonstrators in the streets of the capital Ouagadougou on Sunday urged the soldiers to go further, chanting “Free the country!”

The mutiny underlines the threat posed by growing Islamist insurgencies across West Africa’s Sahel region, a semi-arid strip of land beneath the Sahara Desert.

The militants have seized control of swathes of territory across Burkina Faso and its neighbors, Mali and Niger. In some cases, they force residents to abide by their harsh interpretation of Islamic law.

Heavy gunfire was first heard around 5:00 a.m. (0500 GMT) on Sunday at Ouagadougou’s Sangoule Lamizana camp, which houses a prison whose inmates include soldiers involved in a failed 2015 coup attempt, Reuters reporters said.

Hundreds of people later came out in support of the mutineers. At the Lamizana camp, where a crowd of about 100 sang the national anthem and chanted, the soldiers responded by firing into the air. It was not clear whether this was to show support for the demonstrators or to disperse them.

In downtown Ouagadougou, near the Place de la Nation, police fired teargas to disperse around 300 protesters.

Soldiers also fired into the air at an air base close to Ouagadougou International Airport, according to Reuters reporters. The U.S. embassy also reported gunfire at three other military bases in Ouagadougou and at bases in the northern towns of Kaya and Ouahigouya.

Elsewhere in Ouagadougou, protesters burned and looted the headquarters of Kabore’s People’s Movement for Progress (MPP), a Reuters reporter said.

The spokesperson for the mutineers, who addressed reporters in front of Lamizana camp, called for better welfare for wounded soldiers and their families.

Burkina Faso’s government confirmed gunfire at some military camps but denied reports on social media that the army had seized power.

“The head of state has not been detained; no institution of the country has been threatened,” Simpore said.

Kabore was not seen in public. His Twitter account issued a tweet to encourage Burkina Faso’s national soccer team in its Africa Cup of Nations match against Gabon, then congratulated them later for their victory. It made no mention of events at home.

NetBlocks, an internet blockage observatory, said web access had been disrupted as of around 10 a.m. A spokesperson for the airport said flights had not been cancelled.

Governments in West and Central Africa are on high alert for coups after successful putsches over the past 18 months in Mali and Guinea, where the army removed President Alpha Conde last September.

The military also took over in Chad last year after President Idriss Deby died on the battlefield.

The 15-member Economic Community of West African States said in a statement that it was following the situation with great concern, and called on the Burkina military to favor dialogue with the authorities.

Burkinabe authorities arrested a dozen soldiers earlier this month on suspicion of conspiring against the government.

The arrests followed a shake-up within the army’s leadership in December, which some analysts saw as an effort by Kabore to shore up his support within the military.

Anti-government demonstrations were planned for Saturday, but the government banned them and the police intervened to disperse hundreds of people who tried to assemble in Ouagadougou.

The government has suspended mobile internet service on several occasions, and the tense situation in November led the U.N. special envoy to West Africa to warn against any military takeover.