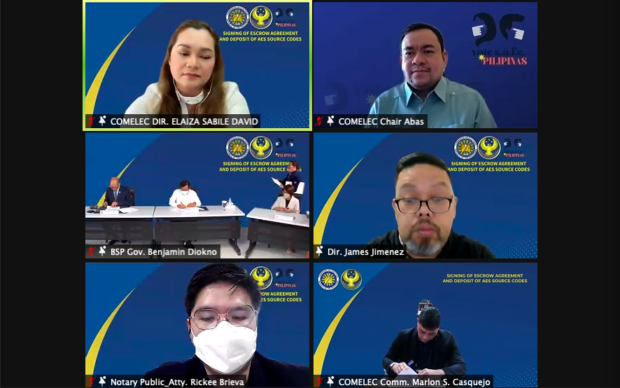 Comelec and BSP sign escrow agreement to safeguard automated election system source codes for the May 9 elections. Screengrab from Zoom

MANILA, Philippines — The Commission on Elections (Comelec) assured the public that the source codes of the automated election system (AES) would remain intact after signing an agreement with the Bangko Sentral ng Pilipinas (BSP) on Monday.

Comelec and BSP officials signed an escrow agreement to safeguard the integrity of the AES source codes to be used in the May 9 elections.

(Under this escrow agreement, the Bangko Sentral ng Pilipinas guarantees that no tampering will occur with the source code, which means that the instructions to the machines and the system will remain unchanged.)

(So, this only proves that the source code will not be hacked unlike what they said that it will be hacked, they will change the system, or they will intervene, etc.)

In October 2021, Comelec launched the local source code review of the AES.

BSP Governor Benjamin Diokno said that the agency would be responsible for safeguarding the source codes.

“The keys and the combination of the vault [are] kept by Comelec but we are responsible for maintaining the key to the lock inside the BSP,” Diokno noted.

Comelec Commissioner Marlon Casquejo said that there is no schedule yet of the actual turnover of source codes to the BSP.

Abas assured the public that the system is “secured and intact.”

“So, sa ating mga kababayan, this is an assurance talaga… Hindi katulad dati na manual may mga dagdag-bawas na allegation. But here, the system is intact, secured, and it is deposited to the BSP and not Comelec or kahit sinong mga grupo or agency diyan,” he told the public.

(To our fellow Filipinos, this is an assurance. Unlike before that, the system is manual, there are manipulation allegations. But here, the system is intact, secured, and it is deposited to the BSP and not Comelec or any group or agency there.)