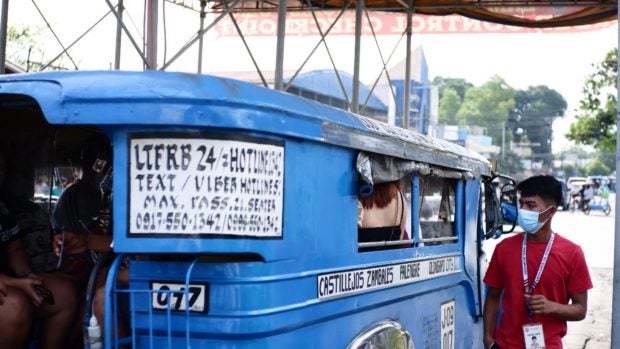 FILE PHOTO A passenger jeepney is being inspected at a checkpoint in Zambales. | Photo by Joanna Rose Aglibot

An LTFRB official in Central Visayas has announced the April deadline for traditional jeepney phaseout.

Escudero said that the phaseout would pave the way for unemployment and public transport shortage in many regions.

(Who does not want modernization and a better public vehicle? The issue here is the implementation because the government did not give jeepney drivers ample time and capacity and jeepney owners to pay for it. Modernized jeeps are so expensive.)

The Department of Transportation said that the average cost of modernized vehicles significantly increased from P1.6 million to P2.4 million per unit, which pushed the government to double its equity subsidy to public utility vehicle operators to P160,000 per unit registered.

(And when they force to restrict the operations of traditional jeep, there will be a shortage of vehicle units to open our economy. The transportation will not accommodate our many citizens and workers who need to work or go to school when it opens for face-to-face classes.)

Under President Rodrigo Duterte’s administration, the Public Utility Vehicle Modernization Program requires a massive fleet modernization and restricts the operation of jeepneys that are at least 15 years old.

Jeepneys with engines that are Euro-4 compliant, LPG-powered, electronic or hybrid will be granted a franchise to operate.

(A fight against LTFRB may start. Who, at this time, can pay for that amount just to ply the roads? This pandemic, what we should think is how to help and recover.)

(When the jeepney modernization will be implemented in April, many drivers will lose their livelihood and many Filipinos, commuters, will lose access to public transport. So, what’s the benefit of modernization?)

Escudero said that in Sorsogon, modernization was prohibited, citing that a resolution allowing traditional jeepney to ply their routes at least until June 30, when new officials are elected, was passed.