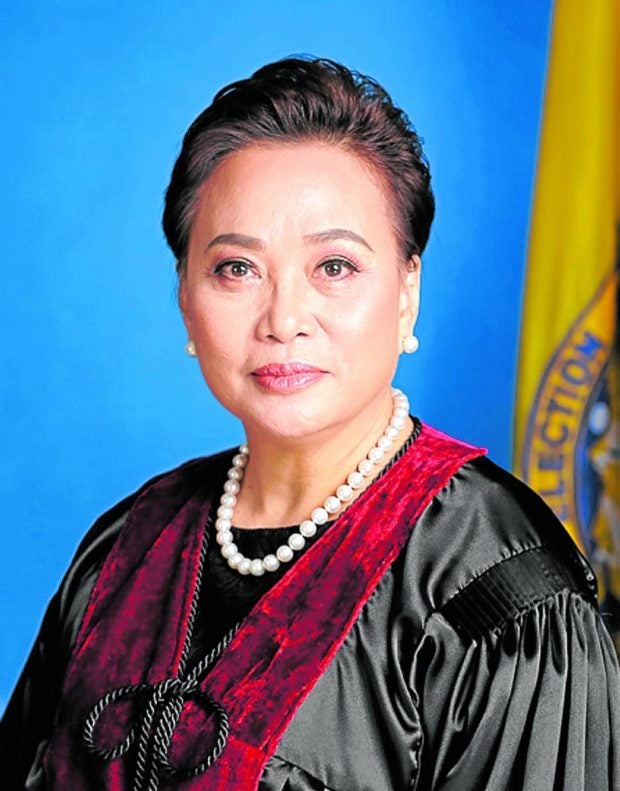 Election Commissioner Rowena Guanzon on Friday said she suspected that an “influential and powerful senator” was behind the delay in the release of the resolution on the consolidated disqualification cases filed against presidential aspirant Ferdinand Marcos Jr.

Guanzon, 65, who is retiring on Feb. 2 after serving seven years as a member of the Commission on Elections (Comelec), declined to identify the senator but told the Inquirer it wasn’t Marcos Jr.’s sister, Sen. Imee Marcos.

“The plan is to delay the resolution of this case until after I retire so that my vote will not be counted. This is a conspiracy to defeat my vote,” she said in an interview.

“This is unfair to me and unjust to the Filipino people. The voters have to know if their candidate is qualified or not,” Guanzon said.

She explained that it was the suspected intervention of the senator that prompted her to call Salvador Panelo, former chief presidential legal counsel and spokesperson, which she revealed on Thursday. She said Panelo told her President Duterte had instructions not to intervene in the work of the Comelec.

Guanzon is the presiding commissioner of the Comelec’s First Division, which is handling the disqualification cases against Marcos Jr. filed separately by Akbayan and other activist groups, the Campaign Against the Return of the Marcoses and Martial Law, and a group claiming to be the original members of Partido Federal ng Pilipinas (PFP).

The former senator is running as standard-bearer of the little-known PFP and his running mate is Mr. Duterte’s daughter, Davao City Mayor Sara Duterte.

Guanzon said she and the two other members of the division—Aimee Ferolino and Marlon Casquejo—agreed that the resolution on the consolidated case would be released seven days after it received the three cases on Jan. 10, but no resolution has been released as of Friday.

Guanzon suspected the influential senator had caused the delay because she believed that Ferolino, the designated ponente, or the commissioner assigned to write the resolution, “would not do this on her own.”

Guanzon said she and the other commissioners could not reach Ferolino.

The last time Ferolino replied to her text messages was on Jan. 24, she said. Guanzon said she asked Ferolino whether she wanted to waive writing the resolution and let Casquejo take over since she appeared to be having a difficult time, but Ferolino refused.

“If she waived on Jan. 24, by now Commissioner Casquejo would have already finished it,” Guanzon said.

Breaking her silence on Friday, Ferolino turned the tables on Guanzon, accusing the division presiding commissioner of trying to influence her into disqualifying Marcos Jr.

In a letter to Comelec Chair Sheriff Abas, Ferolino belied Guanzon’s claim that the poll body’s First Division was supposed to issue its decision on the three consolidated petitions on Jan. 17.

Ferolino said there was no reason to rush the resolution of the cases, saying the petitions against the former senator should be “treated as any other cases.”

She said Guanzon arbitrarily imposed the deadline and announced the schedule for the release of the ruling on Twitter.

“What really happened here is undue rush,” Ferolino said in her three-page letter. “Why rush when this commission decides cases on the merits and not for publicity or to accommodate and please anybody or somebody?”

She accused Guanzon of sending her messages that were “sometimes out of line,” pressing her to issue the resolution.

“In all honesty, it was not only the date of the promulgation that she imposed upon me. She also consistently took liberties in telling me to adopt her opinion,” she said.

Ferolino said it was “quite appalling” that Guanzon released her own separate opinion when the main ruling had not yet been submitted.

“One thing is clear to me; she is trying to influence my decision and trying hard to persuade me to her direction,” Ferolino said.

In her narration of events leading to Thursday’s statements by Guanzon, Ferolino cited the COVID-19 infection of the lawyer assigned to prepare the briefer on the case and to two other lawyers who contracted the virus.

Guanzon urged Ferolino to release the resolution by Monday because she was retiring at midnight of Feb. 2.

Also retiring on the same day are Abas and Commissioner Antonio Kho Jr.

If Ferolino would not release the resolution, Guanzon said they could all be held liable for violating Republic Act No. 3019, or the Anti-Graft and Corrupt Practices Act.

The Second Division of the Comelec threw out a separate petition to nullify the certificate of candidacy (COC) of Marcos Jr. The petitioners argued that the former senator did not disclose in his COC, as required by the election code, that he was barred from running for public office under the National Internal Revenue Code following his tax conviction.

The division has yet to decide on another similar petition.