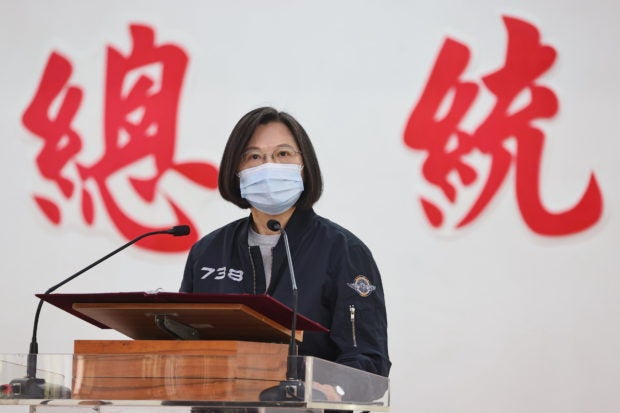 FILE PHOTO: Taiwan’s President Tsai Ing-wen makes a speech during her visit to a military base in Tainan, Taiwan, January 15, 2021. REUTERS/Ann Wang

TAIPEI — Taiwan President Tsai Ing-wen on Friday expressed “empathy” for Ukraine’s situation due to the military threat the island faces from China, saying force was not the solution to resolving disputes.

Taiwan has complained of repeated Chinese military activity near it over the past two years, mostly flights into the island’s air defense zone, part of a pattern of what Taipei views as pressure from Beijing to accept China’s sovereignty claims over the island.

Taiwan on Sunday reported the largest incursion since October by China’s air force in its air defense zone, with the island’s defence ministry saying Taiwanese fighters scrambled to warn away 39 aircraft in the latest uptick in tensions.

“Taiwan has faced military threats and intimidation from China for a long time. Therefore, we empathize with Ukraine’s situation, and we also support the efforts of all parties to maintain regional security,” her office cited her as saying at the meeting.

Tsai has asked the National Security Council to set up a working group on the Ukraine situation to watch developments and the possible impact on Taiwan’s security, her office added.

Peace and stability in the Taiwan Strait and the Indo-Pacific region is not only the shared responsibility of all parties, but also the common expectation of the international community, Tsai said.

“The military is definitely not an option to resolve disputes – this is a universal truth.”

Russia said on Thursday it was clear the United States was not willing to address its main security concerns in their standoff over Ukraine, but both sides kept the door open to further dialogue.

The United States and NATO submitted written responses on Wednesday to Russia’s demands for a redrawing of post-Cold War security arrangements in Europe since it massed troops near Ukraine, prompting Western fears of an invasion and new U.S. pledges of defense support.

Read Next
3 nabbed in Calapan City drug buy-bust
EDITORS' PICK
What to watch out for when selecting a video surveillance solution
Heads may roll at BOC, says Palace if sugar smugglers are allowed to use recycled import permits
vivo brings to the Philippines a powerful smartphone with a slimmer body, the vivo Y02s for only PHP 6,499
DOH reports increase in daily COVID-19 deaths, mostly unvaxxed
Palace: Biggest supermarkets in PH commit to sell sugar at P70 per kilo
House energy committee chair Arroyo bats for cheap electricity
MOST READ
DepEd to give teachers P5K cash allowance within first week of classes
Alyssa Valdez to miss Creamline’s AVC Cup campaign
DOJ indicts bank officer in $2.1 billion Wirecard fiasco
GSIS cool to idea of lowering retirement age in PH
Don't miss out on the latest news and information.