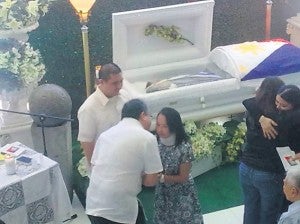 The “two widows” came to mourn separately, avoiding any confrontation, as the remains of the late Negros Occidental Representative Ignacio “Iggy” Arroyo were finally brought to the family’s ancestral home after a bitter legal battle in London over who should claim his body.

And so for a few hours Thursday, it was former President and now Pampanga Representative Gloria Macapagal-Arroyo who presided over the wake of her brother-in-law at La Vista subdivision in Quezon City.

Thanks to an arrangement agreed upon with a court, fears of any confrontation between Iggy’s estranged wife Aleli and longtime partner Grace Ibuna did not materialize.

The ailing Arroyo was able to attend her brother-in-law’s wake only after obtaining an eight-hour furlough from her detention at Veterans Memorial Medical Center (VMMC), where she awaits trial for electoral sabotage.

In the ancestral home, as in the old days, Arroyo played host to her political allies in a kind of “reunion,” accepting their condolences and hosting a lunch for them.

Wearing her neck brace, she looked calm and serene in a black floral dress as she greeted, chatted and mingled with the guests at the sprawling home at No. 14 Badjao St. in the posh subdivision.

It was a solemn, strictly private affair and the house crawled with policemen.

Iggy lay in a flag-draped, white casket framed by wreaths of flowers and his own portrait, in the living room overlooking the family pool.

His body was flown to Manila on Wednesday night from London, where he died of a liver ailment on January 26. It was brought by Grace, her daughter Gabrielle and one of Iggy’s daughters, Bianca.

Later, the body was taken to Arlington Funeral Homes, also in Quezon City, before it was brought to La Vista.

It was the biggest gathering of Arroyo and her allies since she was arrested in November last year and detained at the VMMC. There, owing to court restrictions, her allies could only visit her individually, or in pairs.

Arroyo was driven by the police to La Vista at around 8 a.m. amid heavy traffic.

By 9 a.m. visitors began streaming in.

Arroyo and her husband led the mourners at the Mass celebrated by Fr. Jose Perez. Aleli sat next to the former President, while Iggy’s daughters sat behind. Some were teary-eyed.

Reporters were stopped at the gate of La Vista at the request of the Arroyos and homeowners.

Flag to the daughters

Aleli was not at Arlington, where a Mass was also offered before Iggy’s body was re-embalmed, according to the late congressman’s chief of staff, Bong Road.

The body had been kept in a London morgue for 34 days and needed to be “prepared” for viewing.

Grace and her family, including her parents and siblings, attended the Mass at Arlington along with Iggy’s other relatives.

Funeral arrangements were being coordinated by Bernardina (Dina) Arroyo-Tantoco, Iggy’s daughter by his first wife, Marilyn Jacinto, according to Road. He said Dina would coordinate the arrangements with Aleli and Grace.

Road also said the flag to be used at the necrological rites to be held in the House of Representatives would be turned over to Iggy’s daughters Bianca, Dina and Alelou.

Bianca and Dina are the late congressman’s children with Jacinto, while Alelou is his child with Aleli.

From ‘Mike and Gloria’

Grace accompanied the body to La Vista but left a few minutes after the former President arrived.

Aleli appeared soon after Grace left. After viewing the casket, Aleli sat beside Arroyo, who gave her a long hug.

Iggy’s casket—surrounded by white, lavender and orange flowers—is to be moved on Saturday to the house he shared with Aleli, just across the street from the Arroyos’ ancestral home. 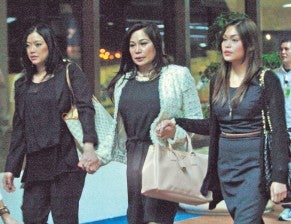 On the left side of the casket was a single wreath of white orchids and large white anthuriums. The wreath simply said it was from  “Mike and Gloria.”

On the right side stood a table with photos of Iggy, his brother Mike and the former President.

Iggy’s body will stay in Aleli’s house until Monday morning, when it will be brought to Batasang Pambansa for the necrological rites. Then it will be flown to Bacolod City for a three-day wake in his hometown of Kabankalan in Negros Occidental province.

The body will be brought back to Manila for burial at the North Cemetery on March 9.

Arroyo’s death touched off a legal battle for the custody of his body both in courts in the United Kingdom and the Philippines. An out-of-court agreement was reached by the rival parties that led to the return of the body.

Out of respect for Mike Arroyo and his family, “we agreed to bury Iggy (at North Cemetery near his mother’s grave). Rightfully so, I think,” Grace told reporters upon the body’s arrival at the airport on Wednesday. “Iggy loved his brother more than his life.”

Grace also said that before he died, Iggy specifically requested that a wake be held at the Arroyos’ ancestral home in La Vista “because it was where the wakes of his mom and dad were also held.”

According to Grace’s lawyer, Leonard de Vera, the arrangement for the funeral was well defined in the agreement between Grace and Aleli which they submitted in court.

“Everything should be fine. We want an orderly, peaceful and decent burial for Iggy and I think everyone will cooperate,” said De Vera, who added that under the agreement, no one is barred from going to the wake.

“Those are public places, everybody is welcome. Based on our arrangement, no one is barred, so there will be peace and quiet,” De Vera added.

Asked if she felt the same way, Grace answered: “For the sake of peace, yes, so that Iggy can be laid to rest … but after the burial, that’s another story.”

Quezon City Judge Eleuterio Bathan of Regional Trial Court Branch 92 approved the compromise agreement on the wake and burial reached between the Aleli and Grace camps.

“Finding that the stipulations in the compromise agreement to be not contrary to law, morals, public policy and public order, the same is hereby approved and instant case is deemed terminated,” Bathan said in his order.

He told both parties to “faithfully observe and respect” the agreement.

In life, Iggy figured prominently in the controversies that hounded his brother Mike and the former President.

In 1997, Gloria Arroyo, then a senator, was investigated for alleged nondisclosure of $4.6 million worth of properties in San Francisco, California. Mike said it was his younger brother who owned the properties.

In 2003, Iggy again came to the rescue of his elder brother when he claimed ownership of the “Jose Pidal” bank accounts that were allegedly used to launder contributions to Arroyo’s presidential campaign.

Last year, he also figured in a controversy surrounding the sale to the Philippine National Police of secondhand helicopters allegedly owned by the Arroyos. Iggy said his brother did not own the choppers, which were sold as brand-new units to the PNP. With a report from Julie M. Aurelio