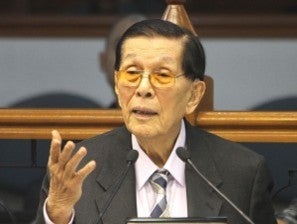 Senate President Juan Ponce Enrile on Thursday assailed so-called “surveys” in connection with the impeachment trial, particularly the one conducted by a student group from the University of the Philippines, his alma mater.

“If that’s true, they should study first so that they would top the bar,” Enrile told reporters in Filipino, taking a swipe at UP’s performance in the 2011 bar examinations wherein no one from the school landed in the Top 10.

“Being an alumnus of UP, I advise them that before you utter a word, show us that you deserve to make that statement by your performance,” he said.

Enrile was irked by the “survey” conducted by the UP Paralegal Society from February 24 to 28. It had 504 respondents, 74 percent of whom said they no longer trusted Chief Justice Renato Corona.

Only 25 percent answered in the affirmative when asked: “Does Mr. Renato Corona deserve to remain as Chief Justice?”

Enrile, who graduated from the UP College of Law in 1953, said surveys which usually involved 1,000 to 2,000 respondents did not “reflect the opinion of the entire nation.”

The 88-year-old senator, who presides over the impeachment trial, did not mince his words in criticizing a female lawyer from UP, who is usually interviewed by media as a resource person.

The Senate President described as “talkative” the professor at the UP College of Law. “I’m not surprised that the products of her teaching in UP could not pass the bar,” he said.

Enrile also reminded both the defense and the prosecution not to discuss the merits of the case outside the impeachment court.

The prosecution earlier rested its case and withdrew the five remaining articles of impeachment.

But the prosecution “reserved the right” to present evidence on Corona’s dollar deposits with Philippine Savings Bank.

“The trial is not outside—it’s inside the Senate,” Enrile said.

Prosecutors have been criticized on several occasions for arguing their case against Corona at press conferences and other media interviews.

Asked if this tack was related to the political ambition of some of the prosecutors in the 2013 elections, Enrile said: “That is double-edged because no matter how brilliant the way they present it, there are many dissenting people who will see the flaw in their argumentation.”

Enrile was careful not to touch on President Benigno Aquino III’s separate campaign against Corona.

The President has been calling for the Chief Justice’s conviction, citing purported evidence presented by the prosecution in the trial so far. The defense has yet to argue its case.

“It’s the right of any official to express his opinion,” Enrile said, referring to Mr. Aquino.

The president officer of the impeachment court said senators were “mature enough not to be influenced by any statement outside.”