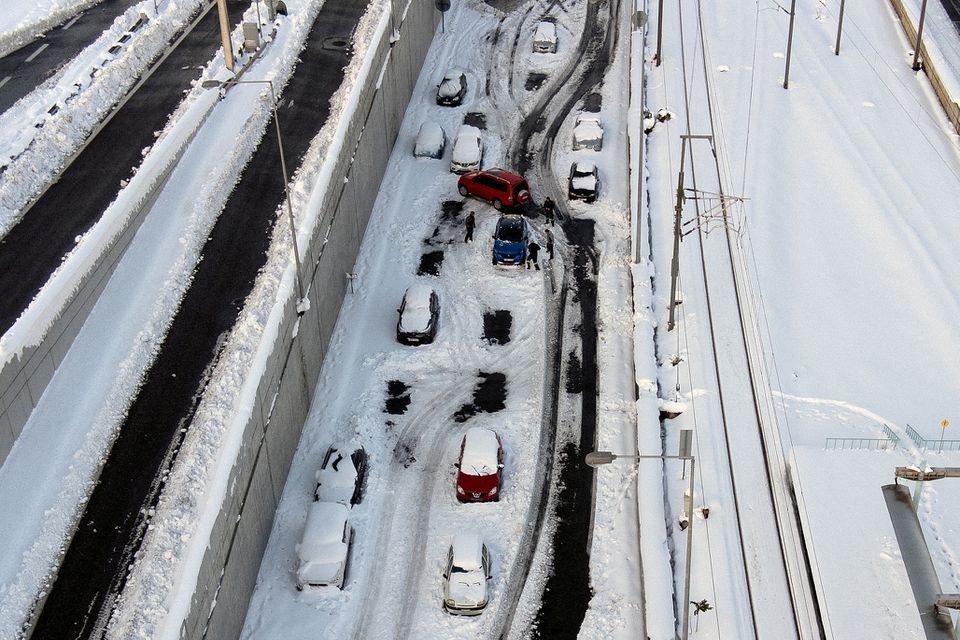 Firemen plough snow around a car as abandoned vehicles are covered in snow on the Attiki Odos motorway, following heavy snowfall in Athens, Greece, January 25, 2022. Picture taken with a drone. REUTERS/Alkis Konstantinidis

ATHENS — Greek Prime Minister Kyriakos Mitsotakis apologized on Wednesday for the state’s unpreparedness to deal with the impact of a severe snowstorm that brought transport in Athens to a halt and left thousands of drivers stranded on a main city motorway this week.

Heavy snow is rare in the Greek capital but the country has now been hit by extreme weather for a second consecutive winter.

After Monday’s snowstorm, thousands were evacuated from the Attiki motorway, the capital’s main ring-road, some abandoning their cars on foot or finding shelter at the city’s airport, others trapped in freezing temperatures for hours.

Scores of cars left behind by their drivers and covered in snow remained stuck on Attiki Odos on Wednesday and about 3,000 households remained without power in the wider Athens area for a third day.

“I would like to start with a personal and sincere apology to our fellow citizens who suffered for many hours, trapped on Attiki Odos,” Mitsotakis said at the beginning of a cabinet meeting. “There were mistakes and shortcomings which have to be fixed,” he added.

The government declared Tuesday and Wednesday a public holiday in the wider Athens region and other areas hit by the storm, with schools and public services closed. Authorities said schools will remain shut until Friday as snow was still blocking access to the facilities.

“It’s true that a Mediterranean country’s infrastructure is not always adapted to conditions of heavy snowfall,” he said. “It is equally true, however, that the state mechanism is not yet at the point of readiness that phenomena of such great intensity require.”