Pacquiao to convince brother to support his VP, instead of Sara Duterte 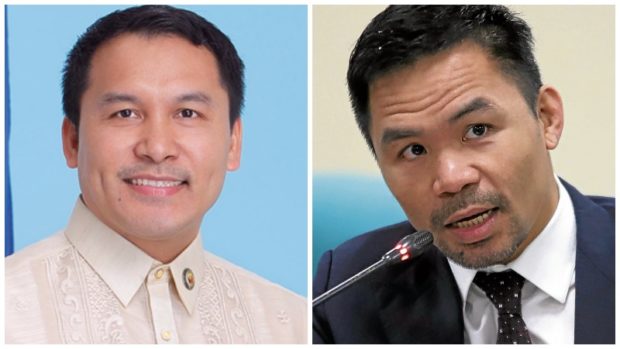 This is a combination photo of brothers Sarangani Rep. Ruel Pacquiao (left) and Senator Manny Pacquiao. Photo from the website of the House of Representatives and Inquirer files

Pacquiao said he was surprised by the news that Ruel reportedly expressed his support for Duterte-Carpio’s vice presidency. However, he has yet to confirm this with his brother.

(I have not talked to him. I was surprised by the news. I want to talk to them.)

He said he would convince his brother to support his running mate, Buhay Party-list Rep. Lito Atienza because it would be embarrassing if his own brother would support another candidate.

(I will talk to them first. I will convince them because it is embarrassing for my vice presidential bet.)

Pacquiao, however, clarified that he is on good terms with his brother and said he thinks he would be able to convince him to change his mind.

“OK naman (We’re OK),” he said when asked about his relationship with Ruel.

“Sa tingin ko naman siguro ay kahit papaano ay maniniwala sila sa akin,” he added when asked if he thinks he can still convince his brother to change his mind.

(I think I can still change his mind and make them believe me.)

It was Lakas-CMD, Duterte-Carpio’s political party, that revealed Ruel Pacquiao’s support for the Davao City mayor.

“Rep. Pacquiao, Gov. Solon, and the mayors of Sarangani expressed support to the vice-presidential candidacy of Inday Sara,” the political party said in an earlier statement.

Pacquiao earlier said he has already summoned his brother to personally explain the truth behind the Lakas-CMD’s press release, saying the move did not consult him.