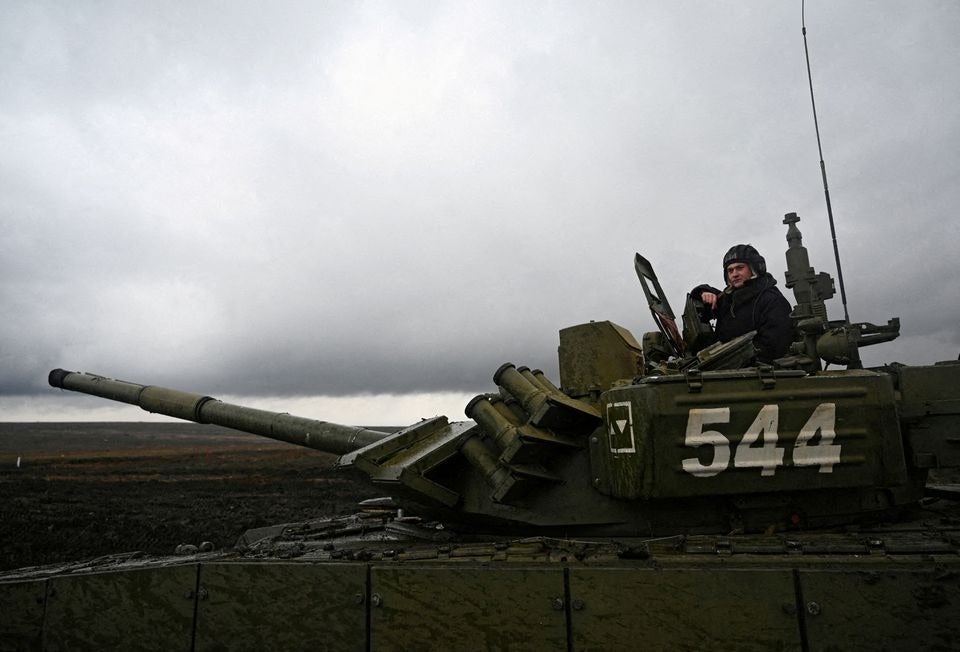 A Russian service member is seen atop a T-72B3 main battle tank during military drills at the Kadamovsky range in the Rostov region, Russia December 20, 2021. | PHOTO: REUTERS/Sergey Pivovarov/File Photo

MOSCOW — NATO is scrambling to beef up its eastern flank and Western governments have warned of crippling economic sanctions if Russia invades Ukraine, but watching Russian state TV provides little sense, for now at least, that war may be imminent.

Russian state TV – vital for the Kremlin’s public messaging over 11 time zones – has often focused in recent days on other issues such as Russian athletes’ hopes for the Beijing Winter Olympics or rising Omicron cases.

“At the moment, there’s no sense the enemy is at the door and that we’re starting a war soon… That’s not happening at all,” said one Russian media analyst, who spoke on condition of anonymity.

In their reporting on Ukraine, Russian state media say Western “panic” is fueling the tensions, along with U.S. troop reinforcements to the region and arm supplies to Kyiv – not the presence of around 100,000 Russian troops near Ukraine’s border.

“They’ve invented it (the Russian threat)… The Americans have been scaring themselves about a Russian invasion for months,” a reporter for the Vesti news program told viewers.

Such messaging dovetails with the Kremlin’s insistence that it is the West, not Moscow, that poses a threat to regional peace and stability, a view that independent polling data shows is widely believed in Russia.

“It’s important (for the Kremlin) that it continues to look like the West is inflaming the situation,” Denis Volkov, director of the independent Moscow-based pollster Levada, said of the Russian news coverage.

Anti-Americanism and scathing commentary about Ukraine’s pro-Western governments have been staples of Russian state TV since 2014, when Moscow’s annexation of Crimea and backing for a separatist revolt in east Ukraine shattered relations with Kyiv.

Western diplomats, analysts and others are now scrutinizing Russia’s state media coverage of Ukraine for any drum beats of war – and for clues as to whether President Vladimir Putin’s troop deployments are indeed the prelude to a military move or just a huge bluff to extract security concessions from the West.

Moscow has said it wants written responses this week to its demands, which include never allowing Ukraine to join NATO.

Andrei Kolesnikov, a Carnegie Moscow Centre analyst, said it would be a mistake to draw any broad conclusions from the current mood of state news coverage.

“It’s obvious there’s a kind of pause. No order has come down from on high for state television. No one knows what decisions will be taken,” he said.

“When needed, they can switch back to hard propaganda of war any second and to explaining why it’s needed. Everything depends on the current situation. This should not be seen as reassuring,” Kolesnikov said.

According to Lavender’s data, around 40% of Russians believe a war is possible.

“Judging by public opinion, (society) is already ready for war. I don’t think it needs preparing… It doesn’t want war, it wants detente, but it is convinced that nothing can be done,” said Levada’s Volkov.

On the streets of Moscow on Tuesday, passers-by said they thought Russia was acting defensively.

“I don’t think Russia will attack anyone. But I can believe there will be a huge Western provocation, which is already under way… Russia will defend itself, and it must,” said one woman who gave her name only as Olga.

Alexei, 33, said: “As for the Russian troops on the border, I’ve heard the U.S. is also massing their troops in Europe. So the situation is not that simple – do we want to defend ourselves or attack? In my opinion, it’s unclear.”