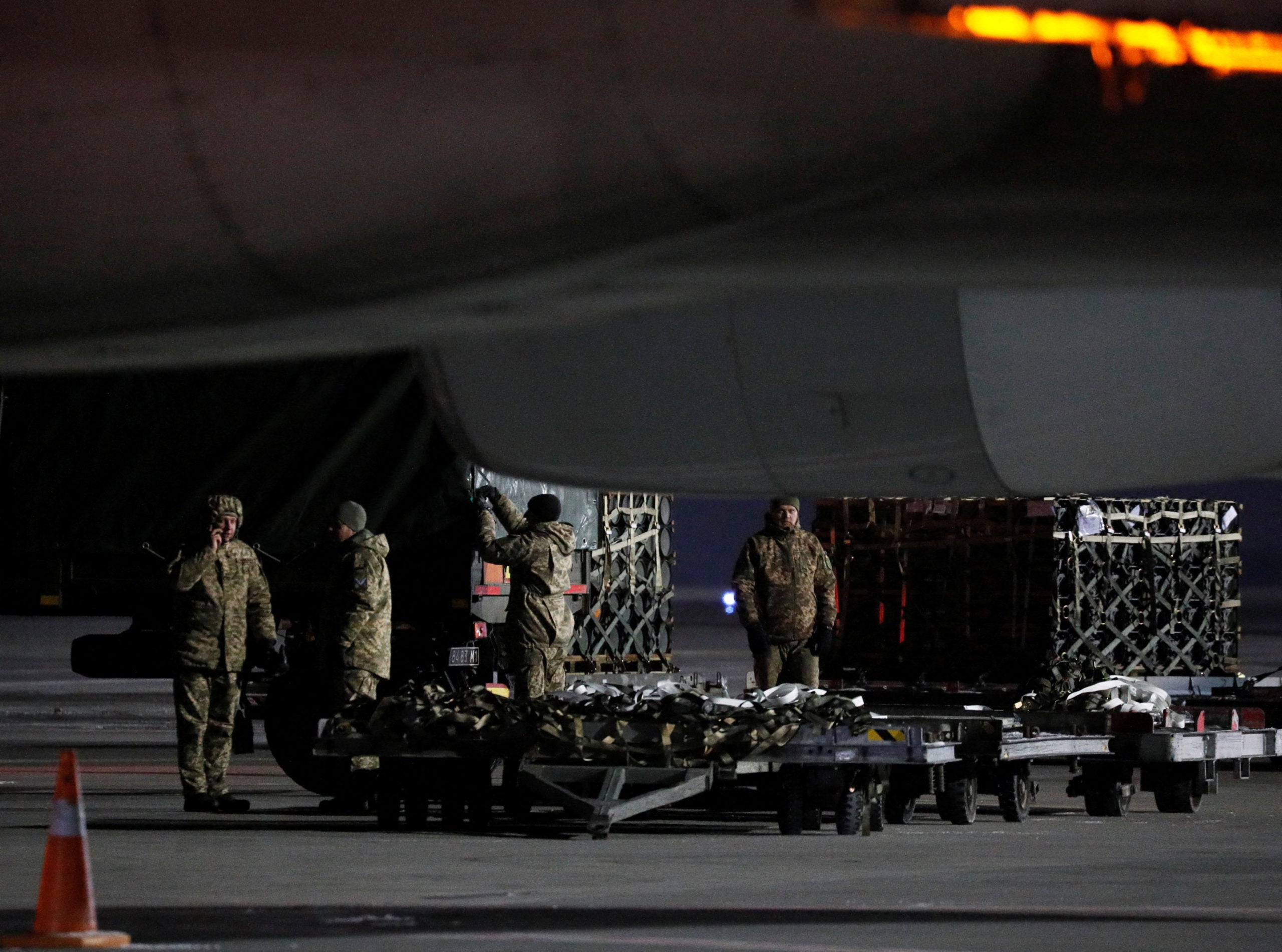 Ukrainian service members unload a shipment of military aid delivered as part of the United States of America’s security assistance to Ukraine, at the Boryspil International Airport outside Kyiv, Ukraine January 25, 2022. REUTERS/Gleb Garanich

Tensions remained high after NATO said on Monday it was putting forces on standby and reinforcing eastern Europe with more ships and fighter jets in response to Russia’s troop build-up near its border with Ukraine.

Russia, which denies planning an attack, said it was watching with “great concern.” Kremlin spokesman Dmitry Peskov repeated Moscow’s line that the crisis was being driven by U.S. and NATO actions, not the Russian troop build-up.

Ukrainian President Volodymyr Zelenskiy, in a televised address on Tuesday evening, urged his compatriots to stay calm and said work was underway to bring about a meeting between him and the leaders of Russia, Germany and France.

“There are no rose-colored glasses, no childish illusions, everything is not simple. … But there is hope,” Zelenskiy said. “Protect your body from viruses, your brain from lies, your heart from panic.”

Biden repeated that there were no plans to send U.S. troops to Ukraine, which is not a NATO member, but said he would consider imposing direct sanctions on Putin and that there would be “enormous consequences” worldwide if Russia invaded.

If Russia were to move into Ukraine with all its forces, it would be the “largest invasion since World War Two” and would “change the world,” Biden said.

Reporters asked Biden if he would see himself imposing sanctions on Putin if the Russian president invaded Ukraine.

Direct U.S. sanctions on foreign leaders are rare but not unprecedented. Others who have faced sanctions include Venezuela’s Nicolas Maduro, Syria’s Bashar al-Assad and Libya’s Muammer Gaddafi.

The U.S. Defense Department has said about 8,500 U.S. troops have been put on heightened alert and are awaiting orders to deploy to NATO’s eastern flank. Biden said on Tuesday he may move the troops in the nearer term.

A U.S. plane carrying military equipment and munitions landed in Kyiv on Tuesday, the third shipment of a $200-million security package to shore up Ukraine.

Western leaders have said unity is paramount, though differences have emerged among European nations over how best to respond.

“It is absolutely vital that … the West is united now,because it is our unity now that will be much more effective indeterring any Russian aggression,” British Prime Minister Boris Johnson told parliament, urging “our European friends” to be ready to deploy sanctions as soon as there was any incursion.

Johnson said Britain was discussing with the United States the possibility of banning Russia from the SWIFT global payments system.

French President Emmanuel Macron said he would seek clarification over Russia’s intentions in a phone call with Putin set for Friday. Political advisers from Russia, Ukraine, Germany and France are due to meet in Paris on Wednesday.

Russia, which has tens of thousands of troops near Ukraine, is demanding security guarantees from the West, including a promise by NATO never to admit Ukraine. Moscow sees the former Soviet republic as a buffer between Russia and NATO countries.

In Washington, senior Biden administration officials said the United States was in talks with major energy-producing countries and companies around the world over a potential diversion of supplies to Europe if Russia invades Ukraine.

Speaking to reporters on a call, the officials did not name the countries or companies involved but said they included a broad range of suppliers, including sellers of liquefied natural gas (LNG).

“We’ve been working to identify additional volumes of non- Russian natural gas from various areas of the world – from North Africa and the Middle East to Asia and the United States,” a senior administration official said, speaking on condition of anonymity.

The EU depends on Russia for around a third of its gas supplies. Any interruptions to its Russian imports would exacerbate an existing energy crisis caused by shortages.

The United States has committed more than $650 million of security assistance to Ukraine in the past year and more than $2.7 billion in total since 2014, when Russia annexed Ukraine’s Crimea peninsula.