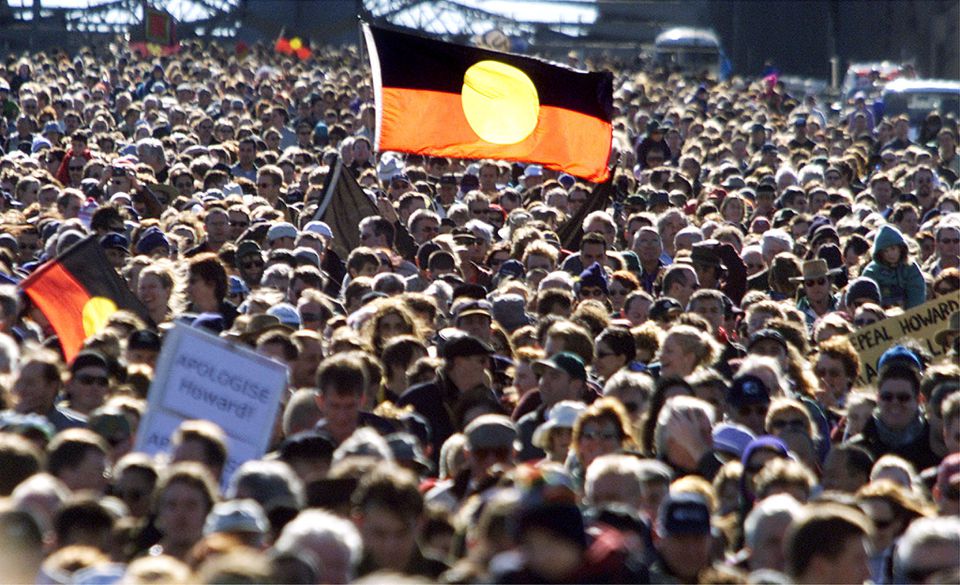 Aboriginal flags rise above a crowd walking across Sydney Harbour Bridge on May 28, 2000. | PHOTO: DG/PB/File Photo

SYDNEY — The Australian government said on Tuesday it had acquired copyright to the Aboriginal flag so it can be freely used, resolving a commercial dispute that had restricted sporting teams and Aboriginal communities from reproducing the image.

The Aboriginal flag has been recognized as an official flag of Australia since 1995, flown from government buildings and embraced by sporting clubs.

After a deal negotiated with its creator, indigenous artist Harold Thomas, the flag can be used on sports shirts, sporting grounds, websites and in artworks without permission or payment of a fee, the government said on the eve of the Australia Day national holiday.

Writing in the Sydney Morning Herald on Tuesday, Thomas said he first made the black, yellow and red flag to lead a demonstration in 1971, and it had become a symbol of indigenous unity and pride.

“The flag represents the timeless history of our land and our people’s time on it,” he said in a statement.

The government has paid $20 million to Thomas and to extinguish licenses held by a small number of companies which have stirred controversy since 2018 by demanding payment for the flag’s reproduction.

A parliamentary inquiry in 2020 said the license holder had demanded payment from health organizations and sporting clubs, which could lead to communities stopping using the flag to avoid legal action.

“Over the last 50 years we made Harold Thomas’ artwork our own – we marched under the Aboriginal flag, stood behind it, and flew it high as a point of pride,” he said in a statement.

“Now that the Commonwealth holds the copyright, it belongs to everyone, and no one can take it away.”

Australia Day celebrations, marked with a national public holiday on Jan. 26, have become controversial because the date is seen by indigenous Australians as marking the invasion of their land by Britain.

It is the date a British fleet sailed into Sydney Harbor in 1788 to start a penal colony, viewing the land as unoccupied despite encountering settlements.

There has been debate over whether to move the national holiday to another date.

Read Next
Pampanga holds 4-day mass vaccination against COVID-19
EDITORS' PICK
House energy committee chair Arroyo bats for cheap electricity
Reignite your passion with the vivo Y35
Individuals affected by ‘Karding’ now over 157,000
Karding damage to infrastructure at P23M
Bongbong Marcos says PH ‘open for business’ with new Clark Airport terminal
Newbie gamers are in for a treat with the power-packed feature of vivo Y16
MOST READ
LPA enters PAR, may develop into tropical depression
Angelica Panganiban ‘duguan, sugatang mom’ one week into breastfeeding
Security guard shoots 2 other guards dead inside Makati subdivision
Badoy not with Office of the President, NTF-Elcac, under Marcos admin — solon
Don't miss out on the latest news and information.