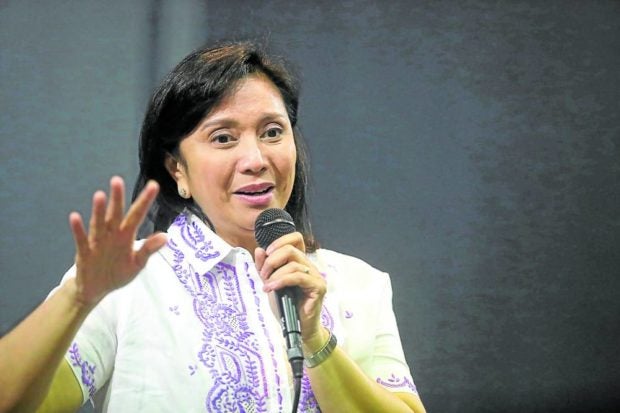 MANILA, Philippines — Amid claims by her critics that she supposedly ducked the presidential aspirants’ interview hosted by radio station DZRH, Vice President Leni Robredo will be appearing in the forum on February 2 according to an official of the network.

In a tweet on Monday, Manila Broadcasting Corporation (MBC) vice president and DZRH Nationwide station manager Cesar Chavez said that members of Robredo’s media team confirmed to them that the Vice President would be attending the interview at 4:00 p.m. to 6:30 p.m. of that day.

(Confirmed! VP Leni Robredo would appear in the ‘Bakit Ikaw’ presidential job interview of DZRH and the Manila Times on Feb 2, 4-6:30pm, according to a statement from his MRO.)

This came after Robredo, late Sunday night, expressed willingness to join the interview, noting that she was unable to confirm her attendance because the original schedule of the interview was moved, and the new schedule had conflicted with her earlier commitments.

“Ang totoo: I was invited to an interview with DZRH, initially set earlier this month. Ipapasok na sana sa schedule ko, but we were later told it was moved. Yung bagong sched nila was already in conflict with ours, as I had other commitments lined up,” Robredo said in a tweet.

(The truth is I was invited to an interview with DZRH, initially set earlier this month.  We would have placed it in my schedule, but we were later told it was moved.  Their new sched was already in conflict with ours, as I had other commitments lined up.)

(Actually I can attend next week.  If they are willing to adjust, we can set it.  I am always ready for talks.)

Chavez also clarified that the original schedule — from January 4 to 14 — was scrapped because most of their personnel contracted COVID-19, or during the early part of the recent surge in infections.

Robredo’s attendance ends speculations made by her critics that she is avoiding a live interview, with the hashtag #LeniDuwag trending over Twitter since Sunday night.  The trend supposedly started after some netizens slammed her supporters for picking on former senator Bongbong Marcos who did not attend the presidential aspirant interviews hosted by GMA-7.

According to the netizens, most of which are supporters of Marcos, it is ironic that Robredo’s supporters call out Marcos for not attending, while she is also skipping the DZRH interview.

Marcos supporters based it on a post from political science Professor Antonio Contreras, who noted that Robredo declined an interview request from DZRH.

Contreras is one of the panelists of the DZRH forum that it would host with The Manila Times.

In a later post, Contreras also disputed Robredo’s supporters who claimed that she was maligning Robredo by saying that the Vice President was not attending the forum.

“I was careful and I did not want to create a problem by providing critics of Leni Robredo anything they can use against her. It is only yesterday when I posted with the names of the panelists and attendees. And all I did was to state a fact in three words: Leni Robredo declined. No more, no less,” he explained.

“It is therefore a lie for people to say that I maliciously maligned Leni Robredo, because what I did was simply to state a fact,” he added.

Robredo and Marcos appear headed for another showdown, which is reminiscent of their vice presidential battle in 2016.

Both are frontrunners in the 2022 presidential polls, according to latest surveys: last December, Pulse Asia said that if elections were held from December 1 to 6, Marcos would lead, garnering 53 percent of the votes while Robredo would be a far second with 20 percent of the respondents picking her.