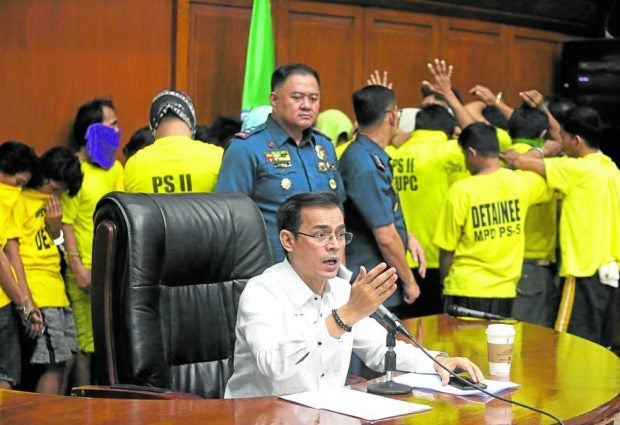 “We will appoint the right person in that particular agency para lumago ulit ‘yung salapi ng PhilHealth na pera naman ng tao. So we have to put a financial guy or group of people who understand finances and how to grow the money of PhilHealth,” the 47-year-old presidential aspirant said.

Moreno said it is time to do away with the traditional practice of tapping unqualified people for key government positions as a political favor to those who supported a winning presidential candidate.

According to the Universal Health Care Law (Republic Act 11223), a person recommended to become PhilHealth president and CEO must have “at least seven years of experience in the field of public health, management, finance, and health economics, or a combination of any of these expertise.”

The state health insurer, which has been hounded by controversies and allegations of mismanagement over the years, has projected that its actuarial life is likely to be only until 2027.

In a congressional hearing in September last year, a PhilHealth executive said the eventual collapse, unless addressed soonest, is due to the agency’s net losses as a result of the expected rise in the number of COVID-19 related claims.

Philhealth has also put on hold since January 2021 the collection of new adjustments in member premium contribution following the order of President Rodrigo Duterte to ease the people’s burden due to the pandemic. With the suspension of the increase, current collection remains at 3 percent.

The Universal Health Care Act mandates increases in member premiums by increments of 0.5 percent every year, starting 2021, until it reaches the 5-percent limit in 2025.

In the same interview, the Aksyon Demokratiko standard bearer said the rehabilitation of the war-torn Marawi City can be completed in six months’ time under his administration if he wins the presidency in the May national elections.

“By December of 2022, tapos na ‘yon, 100 percent,” a confident Moreno said, when asked about his plans in Marawi City, which four years ago was raided and occupied by rebels known as Maute group and allied with the extremist Islamic State.

In October 2017 Marawi City was liberated by government forces but at a hefty cost because most establishments, houses, bridges and other infrastructure were destroyed, as military troops expunged the extremists during a five-month armed fighting that practically left Marawi City a battlefield.

Aside from the massive damage to the city, the Marawi siege also left 168 soldiers and police officers dead, 800 Maute militants and dozens of civilians, as well as thousands of residents living in temporary shelters and evacuation centers until now.

According to Moreno, he would replicate in Marawi City what he did in the city Manila, where he provided free housing to Manileños.

Since he assumed Manila’s top post in 2019, Moreno spearheaded six major housing projects, including the Basecommunity, an inter-city horizontal public housing project comprised of 229 units of two-story dwelling measuring 42 square meters; Tondominium 1 and 2 which are situated in Tondo district; and Binondominium which is targeted to be completed in January 2022. Other ongoing housing projects include the San Lazaro Residences, Pedro Gil Residences and San Sebastian Residences.

The government expects 95 percent of the Marawi rehabilitation to be completed by the time President Duterte ends his term on June 30 this year, after funds for rebuilding were released in May 2020.