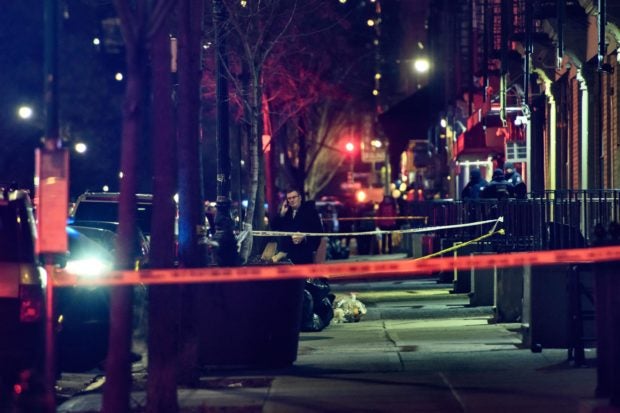 A general view shows the taped off area marking the scene of a shooting in Harlem, New York on January 22, 2022. – New York’s mayor called on the federal government to help “stop the flow of weapons” in the city after a police officer was killed and another wounded in a shooting. (Photo by Ed JONES / AFP)

A shooting in the neighborhood of Harlem Friday left one police officer dead and another in critical condition.

It was the latest flashpoint of the Democratic mayor’s nascent rule, in which he has yet to present a comprehensive plan to rein in the crime he has decried.

“It is our city against the killers,” said Adams, a retired police captain, on Friday night at Harlem Hospital, where the officers — who had been responding to a domestic disturbance — were taken following the incident.

The recent shootings also include a shocking incident in which an 11-month-old girl was hit in the cheek by a stray bullet in the Bronx as she was in a parked car with her mother.

They are seen as part of a broader trend of gun violence fueled by the accessibility of firearms, against the backdrop of the social and economic toll of the Covid-19 pandemic.

And they’re testing the new mayor’s tough-on-crime campaign message, while setting up a potential showdown with the left flank of his party over police funding and crime reduction strategies.

On Friday Adams urged federal action on gun control while calling on New Yorkers to work with cops to stem violence.

“No matter how painful this moment is, don’t give up on these people in this city,” he said.

“Twitter and Instagram and social media — they’re not the people you’re protecting,” he continued in an apparent rebuke of his leftist critics, many of whom are vocal online and have pushed to “defund” the New York Police Department, the nation’s largest.

Now that call may be coming to a head as Adams, whose position on policing has long rankled New Yorkers on the left, prepares to negotiate a new city budget.

He said this week he would consider exempting the police force, with a budget exceeding $5 billion, from citywide cost-cutting measures.

Politicians who use “defund the police” as a rallying cry appear unlikely to give Adams, who has already aggravated progressives over issues including remote learning, any leeway.

She expressed sadness over the killing of the police officer Friday, but added: “To be clear, the death of police officers is not what abolition is. Abolition is an end to violence altogether.”

Last year police recorded 488 homicides in the city of nine million people, up 4.3 percent from 2020 — though Jeffrey Butts, director of the research and evaluation center at the John Jay College of Criminal Justice, points out that 25 years ago the number of homicides in New York was quadruple what is seen today.

While he said he disagrees with the notion of “defunding the police,” he also told AFP “more police funding is not an appropriate response.”

“How are those resources used? To what end? What’s the strategy?” Butts said. “The foundation of our approach has to be economic well-being, health and the well-being of communities, which is a much broader public policy conversation.”

Adriano Espaillat, a congressman whose district includes Harlem and parts of the Bronx, said Saturday “the federal government must play a pivotal role” in stemming the violence, citing a need for legislation mandating stronger background checks and accountability of gun manufacturers.

Ken Sherrill, a professor emeritus of political science at Hunter College, expressed surprise that Adams has not yet unveiled his pitch to tackle crime — but said this is the moment to “mold public opinion.”

“This hands the mayor an immense opportunity and if he doesn’t seize it I’m sure he will regret it,” Sherrill told AFP.

On Saturday, Adams told journalists he was putting “final touches” on an as-yet unscheduled speech that would present a detailed vision on public safety.

“We need a concerted, organized effort and you’re going to see how we’re going to accomplish that when we give my overall blueprint for safety,” Adams said.

Key to his plan would be “addressing the flow of guns.”

Without that, he said, “we’re wasting our time.”