Thousands mourn Buddhist monk who brought mindfulness to the West 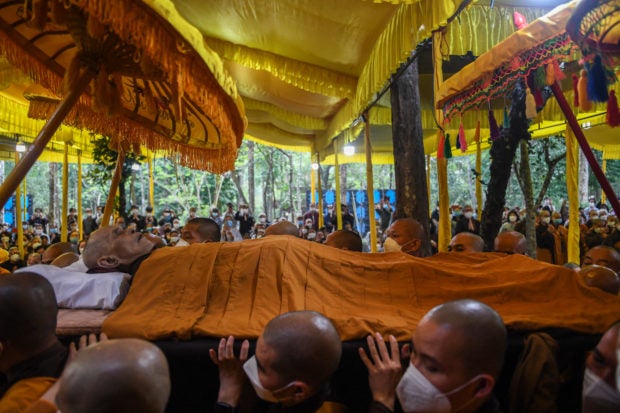 The Zen master, whose reach within Buddhism was seen as second only to the Dalai Lama, died aged 95 on Saturday at the Tu Hieu Pagoda in the city of Hue.

Thich Nhat Hanh spent nearly four decades in exile after he was banished from his homeland for calling for an end to the Vietnam War.

He wrote more than 100 books on mindfulness and meditation and hosted retreats worldwide.

Early on Sunday morning, chanting monks carried his body covered by a yellow sheet along with decorative umbrellas through the throng of mourners.

The smell of incense wafted in the air, as they put his body in a wooden coffin and placed it in a hall decorated with yellow daisies.

Among the mourners was Tran Dinh Huong, 46, who hastily travelled from Hanoi to pay her respects.

“I read many of his books and his words helped me a lot when I was down or going through difficulties,” she told AFP.

“I think it will be a very long time until Vietnam and the world has such a great teacher again.”

Nguyen Nhat from Ho Chi Minh City said it was deeply moving to see the body.

“I admire him for his simple and modest life,” he told AFP.

Thich Nhat Hanh spent 39 years in France and advocated for religious freedom around the world.

Vietnamese authorities permitted him to return to the country in 2018 but plainclothes police kept a vigil outside the pagoda compound closely monitoring his activities.

His messages have not always been welcomed as authorities in Buddhist majority one-party Vietnam are wary of organized religion: in 2009 his followers were driven from their temple in southern Lam Dong province by hired mobs.

But Cong An Nhan Dan newspaper — considered the official mouthpiece of the public security ministry — published on Sunday a glowing tribute to the writer, poet, scholar, historian and peace activist.

“Monk Thich Nhat Hanh from the Plum Village was a spiritual teacher who had a deep and widespread influence across the world,” the obituary said.

Thich Nhat Hanh’s coffin is expected to remain in the hall for a week — as mourners take turns to pray in front of it — before a cremation ceremony next Saturday.