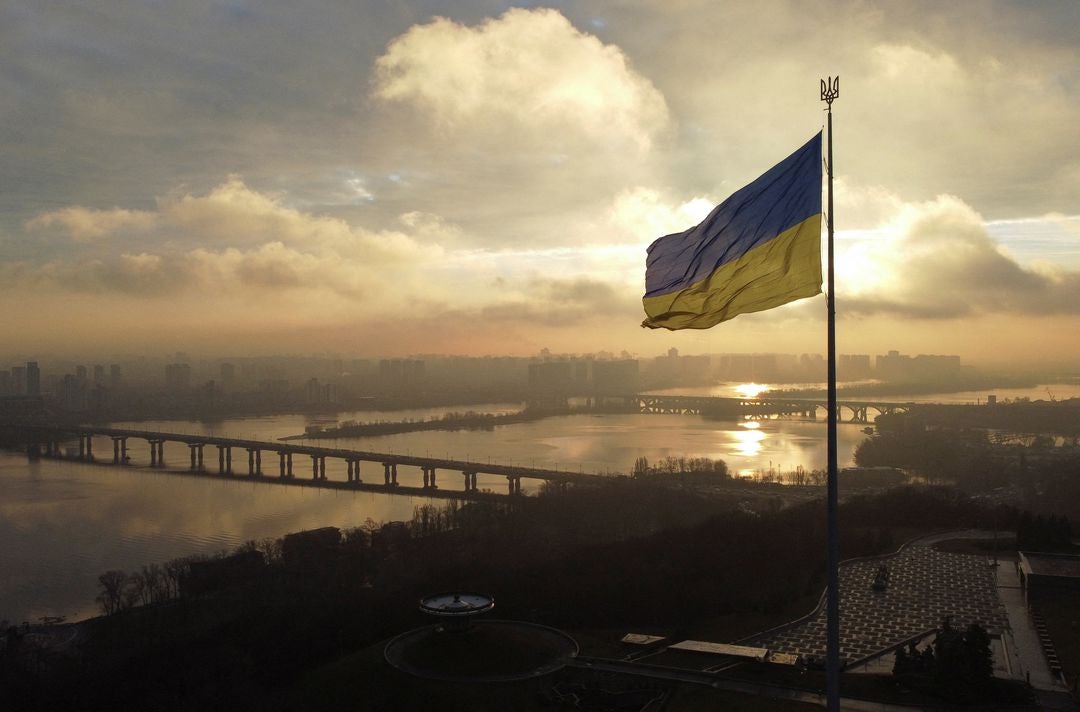 Ukraine’s biggest national flag on the country’s highest flagpole is seen at a compound of the World War II museum in Kyiv, Ukraine, December 16, 2021. Picture taken with a drone. REUTERS/Valentyn Ogirenko

LONDON — Britain on Saturday accused the Kremlin of seeking to install a pro-Russian leader in Ukraine, and said Russian intelligence officers had been in contact with a number of former Ukrainian politicians as part of plans for an invasion.

The British foreign ministry declined to provide evidence to back its accusations, which came at a time of high tensions between Russia and the West over Russia’s massing of troops near its border with Ukraine. Moscow has insisted it has no plans to invade.

The British ministry said it had information the Russian government was considering former Ukrainian lawmaker Yevhen Murayev as a potential candidate to head a pro-Russian leadership.

“We will not tolerate Kremlin plot to install pro-Russian leadership in Ukraine,” British Foreign Secretary Liz Truss said on Twitter. “The Kremlin knows a military incursion would be a massive strategic mistake & the UK and our partners would impose a severe cost on Russia.”

The British statement was released in the early hours of Sunday, Moscow and Kyiv time, and there was no immediate statement from the Kremlin, or from Murayev.

A foreign ministry source said it was not usual practice to share intelligence matters, and the details had only been declassified after careful consideration to deter Russian aggression.

The Russian Foreign Ministry dismissed the comments as “disinformation”, accusing Britain and NATO of “escalating tensions” over Ukraine.

“We urge the Foreign Office to cease these provocative activities, stop spreading nonsense and finally concentrate its efforts on studying the history of the Mongol-Tatar yoke,” the ministry said on its verified Facebook account.

The British claims come a day after the top U.S. and Russian diplomats failed to make a major breakthrough in talks to resolve the crisis over Ukraine, although they agreed to keep talking. Russia has made security demands on the United States including a halt to NATO’s eastward expansion and a pledge that Ukraine will never be allowed to join the Western military alliance.

U.S. National Security Council spokesperson Emily Horne said in a statement: “This kind of plotting is deeply concerning. The Ukrainian people have the sovereign right to determine their own future, and we stand with our democratically-elected partners in Ukraine.”

Murayev, 45, is a pro-Russian politician who opposes Ukraine’s integration with the West. According to a poll by the Razumkov’s Centre think tank conducted in December 2021, he was ranked seventh among candidates for the 2024 presidential election with 6.3% support.

“You’ve made my evening. The British Foreign Office seems confused,” Murayev told Britain’s Observer newspaper. “It isn’t very logical. I’m banned from Russia. Not only that but money from my father’s firm there has been confiscated.”

Britain, which this week supplied 2,000 missiles and a team of military trainers to Ukraine, also said it had information that Russian intelligence services were maintaining links with “numerous” former Ukrainian politicians, including senior figures with links to ex-President Viktor Yanukovich.

Yanukovich fled to Russia in 2014 after three months of protests against his rule and was sentenced in absentia to 13 years in jail on treason charges in 2019.

“Some of these have contact with Russian intelligence officers currently involved in the planning for an attack on Ukraine,” the British foreign office statement said.

Prime Minister Boris Johnson’s Downing Street office also said the British leader was planning to ramp up pressure on Russia this week by calling for European counterparts to come together with the United States to face down Russian aggression.