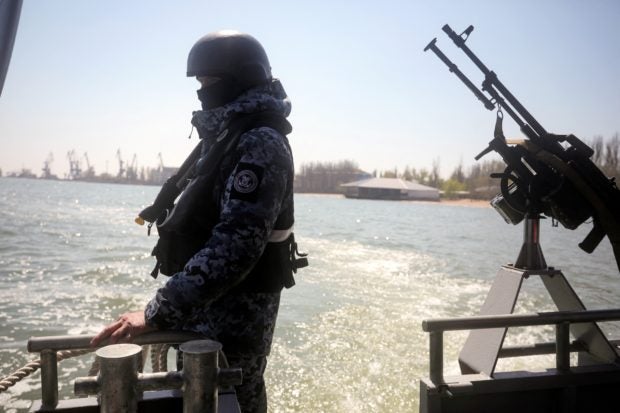 Ukrainian border guards patrol the Sea of Azov off the city of Mariupol on April 30, 2021. AFP FILE PHOTO

LONDON — British Prime Minister Boris Johnson said Wednesday it would be a “tragic mistake” for Russia to embark on “military adventurism” on the borders of Poland and Ukraine, amid escalating regional tensions.
“What we’ve got to do is to make sure that everybody understands that the cost of miscalculation on the borders of both Ukraine and of Poland would be enormous,” Johnson told a panel of senior UK lawmakers.
“I think it would be a tragic, tragic mistake for the Kremlin to think there was anything to be gained by military adventurism.”
The British leader’s comments, during a wide-ranging question-and-answer session with a watchdog committee of MPs, came as the West grows increasingly concerned about Russian troop movements at the Ukrainian border.
Moscow has also been accused of helping to orchestrate a crisis that has left hundreds of migrants from the Middle East trapped on the Belarus-Poland border.
Thousands of troops have been deployed on both sides, and after Belarus recently held joint drills with Russian paratroopers.
ADVERTISEMENT
FEATURED STORIES
NEWSINFO
Comelec asks logistics firm to explain after discovery of poll materials in Cavite vacant lot
NEWSINFO
Bongbong Marcos’ spokesperson nominated as executive secretary
NEWSINFO
SC rules in favor of woman who called off wedding