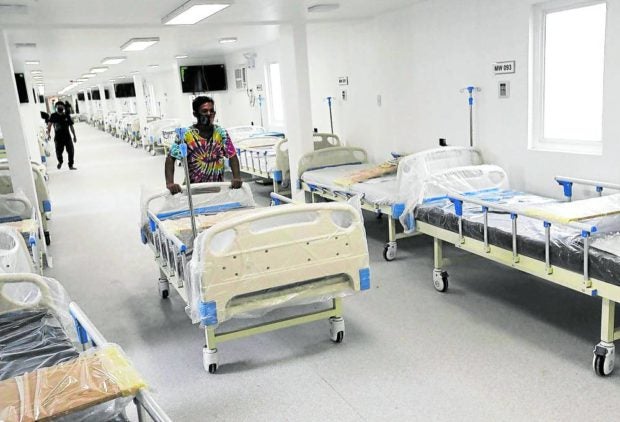 FIELD HOSPITAL Workers arrange beds in a COVID-19 facility built from repurposed freight containers and set up at the Burnham Green section of Rizal Park across Quirino Grandstand in Manila. The field hospital has a 336-bed capacity. —RICHARD A. REYES

MANILA, Philippines — Hospitals need to allocate more beds for COVID-19 patients, but don’t have much need for ventilators and oxygen, as there are few severe and critical coronavirus cases, according to the Department of Health (DOH).

She explained that “in some areas, this is because they have plenty of non-Covid admissions. As for the others, our local governments really do not have the capacity.”

But she noted that “One thing we can see now, which is good, is there [are] not that many [patients] who are severe and critical. So the use of mechanical ventilators, use of oxygen, and use of COVID-19 investigational drugs for severe and critical [cases are] not needed much.”

Vergeire said the health-care utilization rate in most regions is at moderate risk, between 50 and 70 percent.

The Calabarzon (Cavite, Laguna, Batangas, Rizal and Quezon) region registered the highest number of coronavirus cases at 5,991, slightly higher than the 5,989 in the National Capital Region (NCR). Together, they accounted for 42 percent of the cases nationwide. Central Luzon followed with 2,563 cases (9 percent).

Yet despite that decline, NCR remained under “severe” classification and was certainly way above the acceptable attack rate of below 10, OCTA said.

The capital region’s Adar before the current surge, which began late December last year, was 0.69.

The reproduction number, or the number of people a person with COVID-19 can infect, was highest in Davao City at 4.04.

A reproduction number of less than 1 indicates COVID-19 transmission slowing down.

The DOH bulletin on Saturday showed the positivity rate, or the percentage of tests that came out positive, was at 45.1 percent nationwide, was higher than Friday’s 44 percent. This was based on 68,049 people tested on Thursday.