No to ‘negativity’: Marcos Jr. to only do ‘unbiased’ interviews | Inquirer News
Close
menu
search

No to ‘negativity’: Marcos Jr. to only do ‘unbiased’ interviews 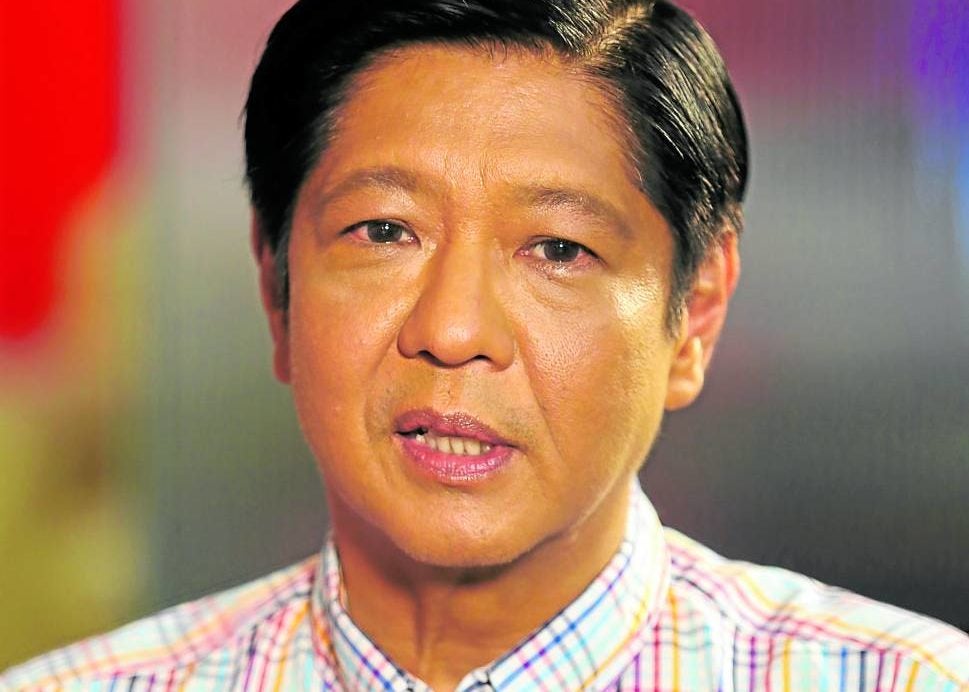 MANILA, Philippines — Former Sen. Ferdinand “Bongbong” Marcos Jr. has refused to join fellow presidential candidates in a television interview because the program host, veteran journalist Jessica Soho, is “biased” against his family and he would rather speak direct to the people on platforms he will choose himself, his spokesperson said on Saturday.

The taped interviews were aired in a special program on GMA 7 on Saturday night. It was the first time that presidential aspirants in the May 9 elections appeared in one television show, although separately.

Since filing his certificate of candidacy last October and becoming the front-runner in surveys, the son and namesake of dictator Ferdinand Marcos has appeared in only a few mainstream media interviews.

“The reason why Bongbong Marcos decided not to join the Jessica Soho show is founded on our belief that the hostess of said popular talk show is biased against the Marcoses,” Victor Rodriguez, who is also Marcos’ chief of staff, said in a statement.

“And therefore, we believe her questions will just focus on negativity about BBM which the UniTeam dislike and will not subscribe as it hopes that the discourse in any forum about this coming elections must focus on how the aspiring presidents will solve our country’s lingering problems caused by the COVID-19 pandemic and what their plans are for our country to roll up from economic stagnation,” he added.

Rodriguez did not explain why they were accusing Soho, a multiawarded journalist and broadcaster, of being biased.

Because job is ‘tough’

In response, GMA said it “takes exception’ to the accusation.”

The network said the interviews were important to public discourse and said Soho had asked candidates for the highest office in the land “the questions that needed to be asked”—their intentions for running, the controversies they had been linked to, their stand on pressing issues and their plans.

“The questions are tough because the job of the presidency is tough,” GMA said in a statement on Saturday.

“We believe that this is an important exercise to inform the public about the candidates seeking their votes in Eleksyon 2022, to help them make the best, most informed choice on their ballots,” it added.

It also said that Soho had consistently been named “the most trusted media personality in the Philippines by both local and foreign organizations.”

‘Direct to the people’

According to Rodriguez, a candidate’s capability to serve as president, preparedness to lead and ability to govern cannot be tested by “his mere appearance on a show that has been perceived by us and our supporters as having previously displayed a preconceived judgment against the Marcoses.”

Discussions on elections should focus on how the aspirants would solve the problems caused by the pandemic, he said.

“Presidential aspirant Bongbong Marcos’ duty is to the Filipino people and not to a particular TV show or program host,” Rodriguez said.

“We will continue with our way of communicating direct to the people in so many equally significant shows, platforms and forums where all the attendees are allowed to present their visions, plans and platforms freely, unfiltered and unhindered by any biases,” he said.

He did not say whether Marcos would join debates, including those planned by the Commission on Elections (Comelec).

Comelec spokesperson James Jimenez said presidential and vice presidential candidates “should commit” to the public that they would participate in the poll body’s debates, even if it wasn’t required.

The Comelec earlier said it was planning one public debate per month for presidential and vice presidential candidates starting in February.

Jimenez said that based on experience, candidates do attend a Comelec-organized debate because of the free and “massive airtime.”

In April 2016, when Marcos participated in a debate with other vice presidential candidates, several members of the audience chanted “Never again, never again to martial law,” stopping him from delivering his opening speech.

During the debate, one of his rivals, then Sen. Alan Peter Cayetano, zeroed in on the plunder allegations against his family during his father’s 20-year rule.

Cayetano later told the Inquirer that Marcos approached him after the debate and told him, “It won’t work,” mocking his attempt to cite the Marcos family’s alleged ill-gotten wealth and the tortures during martial rule.

There was also an “oops moment” for Marcos when he initially said “yes” to the question on whether the candidates had been engaged in any corruption activities in the past—he raised the thumbs-up sign to the question.

The former senator is expected to participate in the one-on-one presidential interviews to be hosted by showbiz personality Boy Abunda.

These will be broadcast on the Kapamilya Channel of ABS-CBN network starting on Jan. 24. His interview is scheduled to be aired on Jan. 25.

Marcos’ excuse for not appearing in Soho’s show was widely criticized online, and the hashtag #MarcosDuwag (Marcos Coward) became the No. 1 trending topic on Twitter.Twitter users questioned Marcos’ decision to shun the interview, saying it was a requirement as he was applying for the job of president.

They also questioned his ability to handle the country’s problems if he could not handle an interview.

Lacson on Saturday also rebuffed Marcos’ claims that Soho was biased with her questions.

“Like any journalist, that’s her job,” he said. “I was asked very hostile questions like my role during martial law, why I evaded arrest in 2010, my co-authorship and sponsorship of the Anti-Terror Law, human rights issues and other hard questions.”

Survivors of the dictator’s martial law regime under Campaign Against the Return of the Marcoses and Martial Law said his son made a “pathetic and cowardly excuse” in refusing to join the Soho interviews.

“[The reason for this was] his refusal to be held to account for his track record of lies, his whitewashing of his family’s crimes against the Filipino people, his nonservice to the country during this pandemic and his actual lack of vision and concrete plans,” the group said in a statement. —WITH REPORTS FROM MELVIN GASCON, DEMPSEY REYES AND INQUIRER RESEARCH