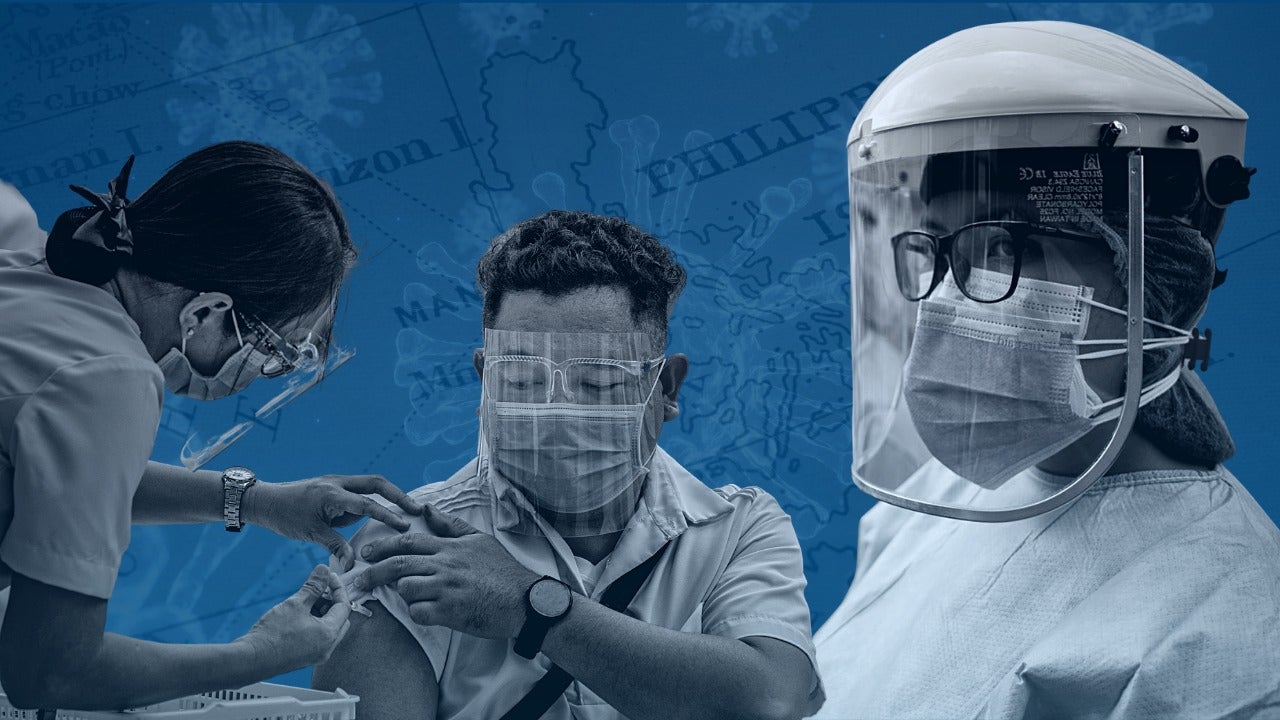 MANILA, Philippines—Following the recent surge of COVID-19 infections in Metro Manila after the holiday seasons, hearing news about the steady decline in growth rate of cases could be good news to some.

The daily growth rate, according to OCTA Research fellow Guido David, referred to  “the percentage increase in cases from the previous day, using the seven-day average” of new cases.

“The daily growth rate in the NCR (based on the 7-day moving average of new cases) has been decreasing steadily,” said David in a tweet.

“It has now decreased to 3%, from 5% a day before. Once the daily growth rate becomes negative, new cases in the NCR are decreasing,” David said.

In a later tweet on Jan. 16, David said the growth rate of cases in a seven-day average in NCR has further gone down to 2 percent.

The following day, on Jan. 17, David reported that the region’s daily growth rate has reached its lowest—negative 1 percent—since a surge in cases struck right after the holidays.

“[T]he daily growth rate of the 7-day moving average has decreased to -1%, i.e. a negative growth was observed,” David posted. 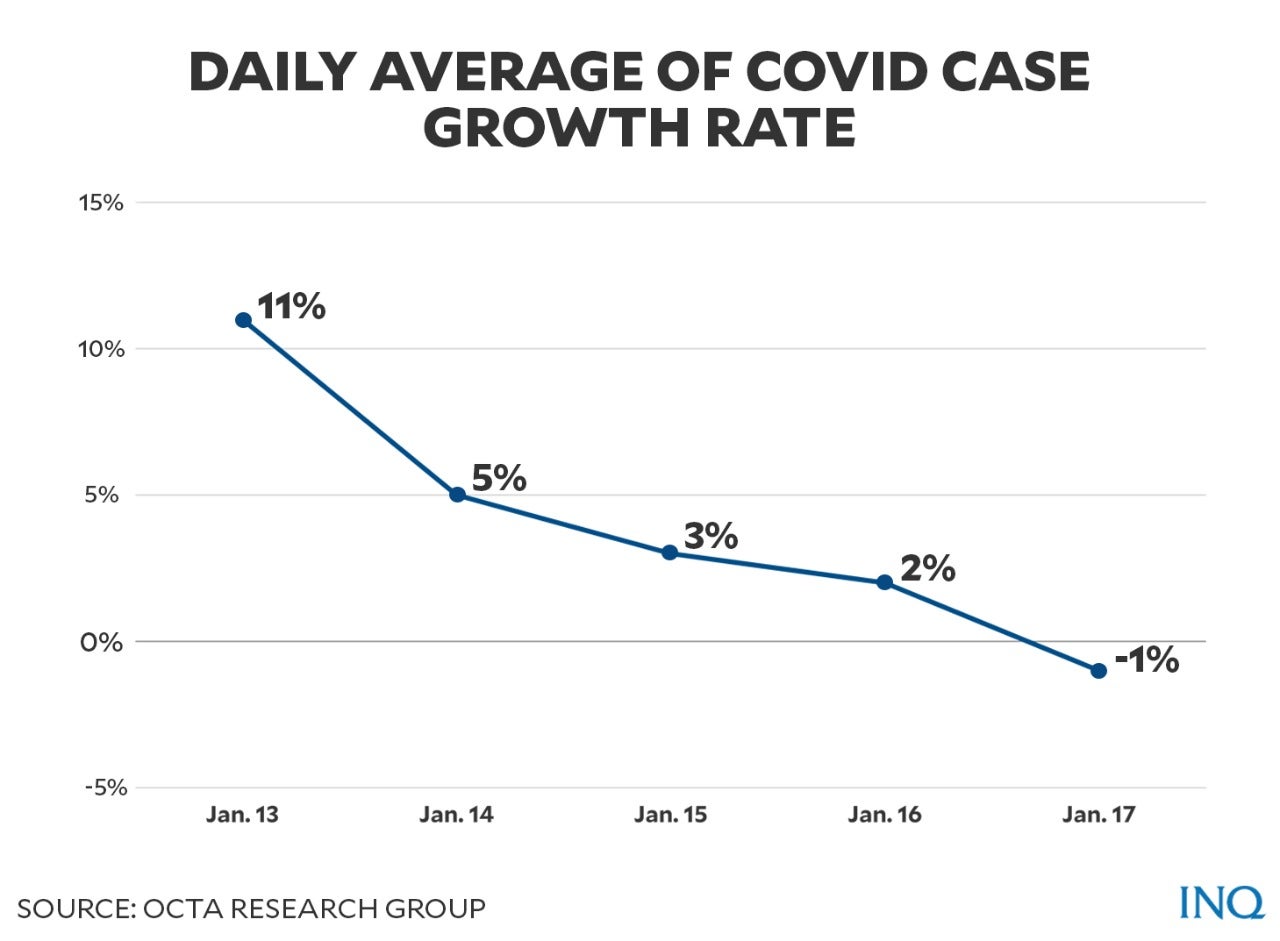 David’s tweet on Jan. 15 noted that “once the daily growth rate becomes negative, new cases in the NCR (National Capital Region) are decreasing.”

While these figures show a positive outlook on the current COVID situation in Metro Manila, the country’s health department said it was still too early to declare that the spread of infections in the region was already declining or slowing down.

In a television interview on Jan. 18, Health Undersecretary Maria Rosario Vergeire, also the spokesperson of the Department of Health (DOH), declined to validate the report of the OCTA Research group saying COVID infections in Metro Manila were on the decline following a decline, too, in daily COVID growth rate. 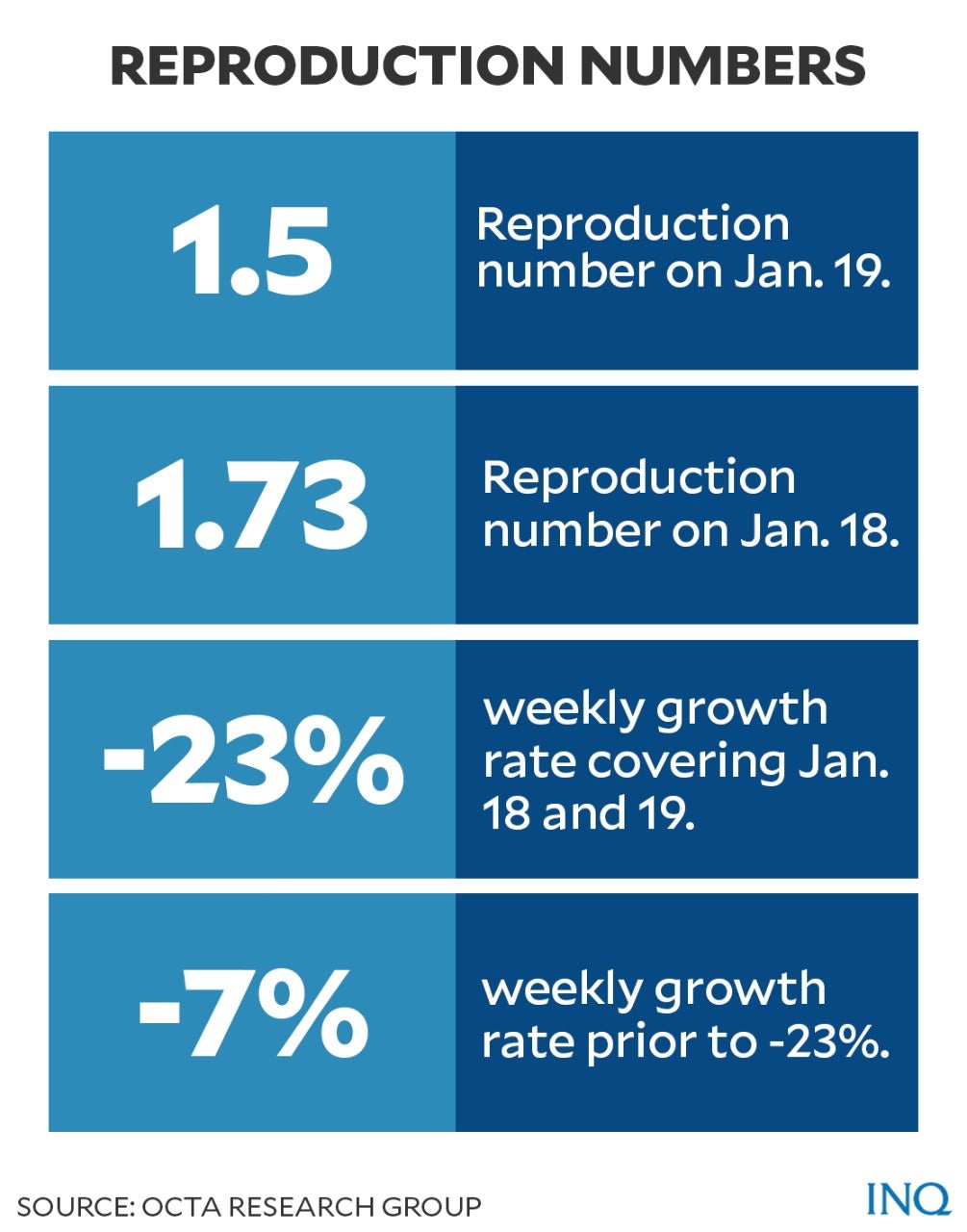 READ: DOH: Too early to say COVID-19 cases are declining

“If we will look at the data, we will see that there is a slight decrease in transmission,” said Vergeire.

“When we started with our situation on Omicron, our case doubling time was just at two days, but now, it takes four days before cases double,” the health undersecretary said.

“But the number of reported cases is still high. This means we still have to take care and continue the interventions we are doing to prevent a further increase in cases. So it is still very early to say and conclude that cases are declining already,” she added.

In the set of data presented by David, the OCTA Research fellow noted that the reports were based on new COVID-19 cases recorded on the DOH bulletin.

Too early to celebrate

It should be noted, however, that the Octa Research group presented some possibilities on why its data showed a decrease in the growth rate or new cases of COVID-19 in Metro Manila.

On Jan. 15, David noted that despite the decrease in growth rate in the region, there could be “strong evidence” that the trend in cases in NCR appears to be peaking” but the figure is still subject to data backlog and late reports—some variables considered by the DOH when examining the daily difference in data.

In his tweet the following day, David emphasized that the actual situation in the region was still unclear due to limitations in COVID testing.

At a Laging Handa press briefing, he clarified that it was still too early to celebrate the decline of COVID infections in the region.

“Again, we cannot celebrate yet. We still have to wait within the next few days or next week to see if the cases [in Metro Manila] are really declining,” David said.

“We need to wait and monitor the trends [over the coming week] to see if cases decrease further,” he added.

David, in a separate interview with radio station dzBB on Jan. 18, likewise reminded the public that Metro Manila is still at critical risk due to the post-holiday increase in COVID infections.

“It’s too early to declare a victory, we should not be complacent because we are still at critical risk,” he said, speaking in Filipino.

On Jan. 5, Health Secretary Francisco Duque III said Metro Manila is at critical risk for transmission of SARS Cov2, the virus that causes COVID-19, after the DOH recorded the highest COVID two-week growth rate of 1,475 percent and an average daily attack rate (ADAR) of 8.79.

Octa Research on Jan. 11 said the region is already at the point of a “severe outbreak” of COVID cases based on metrics of US nonprofit COVID Act Now.

The DOH has also recently identified Metro Manila as one of the five regions in the country with critical case risk classification for COVID.

“What we’re saying here is that there seems to be a glimmer of hope. There might be a chance that the number of cases is starting to go down,” David said.

“If this decrease continues, the number of cases in NCR might drop by the end of January so [we] hope that [the trend] continues,” he added.

Octa Research has also reported the decreasing cases in the City of Manila.

The seven-day average of new cases in Manila likewise decreased.

On Jan. 18, the group recorded a negative 7 percent weekly growth rate in Manila which further went down to negative 23 percent on Jan. 19

The reproduction number refers to the average number of persons who can be potentially infected by the virus — the potential number of cases infected by a single positive case in a population susceptible to the infection.

“There is a definite downward trend in Manila,” said David at the Laging Handa press briefing.

“Actually, the cases are starting to go down in Manila, as well as in the whole NCR, though the [latter] seems to be lagging behind,” he added.

In his Jan. 19 post, the Octa Research fellow noted that “the downward trend in Manila is now clear” and that San Juan and Malabon have also recorded negative one-week growth rates.

“NCR residents must continue to remain vigilant in following public health guidelines to sustain the trends,” David advised the public.