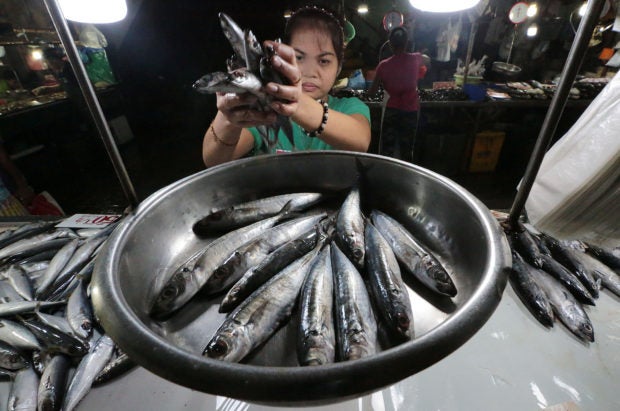 FILE PHOTO: A fish vendor at Commonwealth Market in Quezon City weighs locally sourced “galunggong” or round scad as she waits for customers on Wednesday, August 22, 2018.  INQUIRER/GRIG C. MONTEGRANDE

MANILA, Philippines — Senator Manny Pacquiao on Thursday expressed disbelief over the Department of Agriculture’s (DA) announcement that it would import 60,000 metric tons (MT) of pelagic fish, raising questions as to how a country surrounded by large bodies of water can have a shortage in its fish supply.

According to Pacquiao, the admission of DA Secretary William Dar that the country is experiencing fish shortage is a manifestation of the government’s inability to manage and optimize the country’s rich aquatic resource properly.

Pacquiao said the DA should protect the interest of Filipino farmers and fisherfolks as he stressed that this decision to import pelagic fishes endemic to the Philippines only shows that the government is not doing anything to improve the country’s fishing industry.

Pacquiao pointed out that the Philippines is an archipelagic nation and is regarded to have the world’s 5th longest coastlines, which makes it ideal for fishing and aquatic farming. This advantage of the Philippines, he added, could make it one of the world’s leading providers of marine and other aquatic products if only the government can harness the country’s full potential as a fisheries hub.

Pacquiao said that the admission of fish shortage is also an admission of failure on the part of Dar to manage the country’s marine and aquatic resources properly.

Pacquiao also questioned why Dar had approved the importation of 60,000 MT of fish for the first quarter supposedly to ensure sufficient supply in the country despite the pronouncement of the National Fisheries and Aquatic Resources Management Council that the country has enough fish supply.