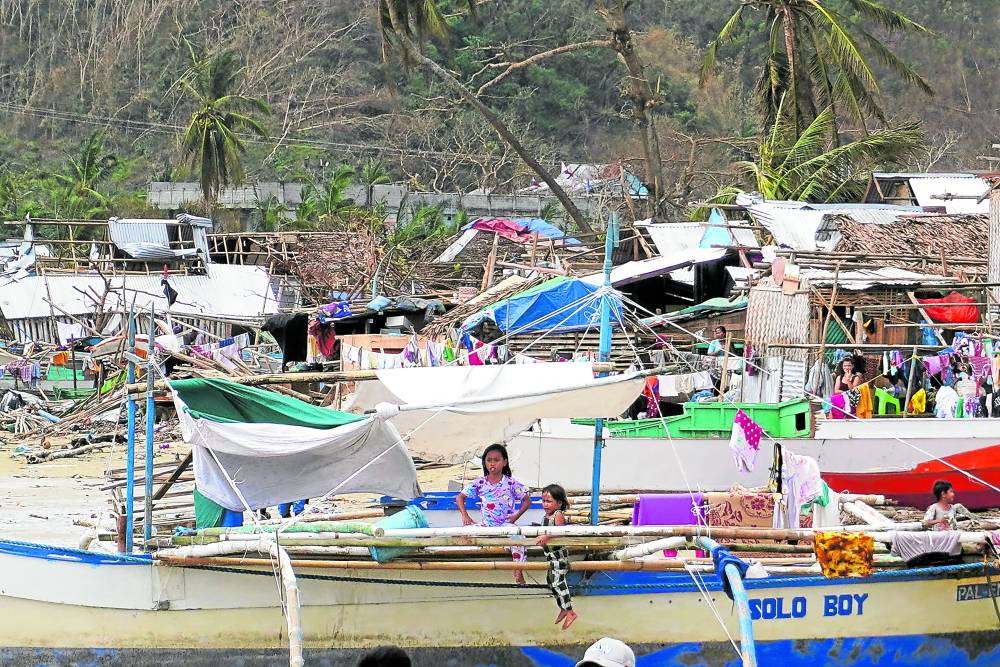 BETWEEN THE GOV’T AND THE DEEP BLUE SEA With their damaged homes behind, two young girls look out to the sea in an “Odette”-hit village in Palawan in December. —OFFICE OF THE VICE PRESIDENT PHOTO

MANILA, Philippines — The national government should extend and expand its emergency employment program in parts of the Visayas, Mindanao, and Palawan that were damaged by Typhoon Odette in late December 2021, Sorsogon Governor Francis Escudero said Thursday.

Escudero was referring to the Department of Labor and Employment (DOLE) cash-for-work program Tulong Panghanapbuhay sa Ating Disadvantaged/Displaced Workers (TUPAD), which provides jobs to people affected by calamities in the form of 10 to 30 days of work following the disaster.

But Escudero thinks the timeline for work under the TUPAD program requires an extension especially as people in areas hard-hit by Odette — which have not yet recovered from the calamity even after a month — can still get the much needed assistance from DOLE.

“With this program, you are hitting two birds with one stone, so to speak. It gives jobs to typhoon victims at a time they needed it most, it encourages them to work, it brings pride and dignity, and at the same time they contribute to the repair, rehabilitation and rebuilding of their communities,” he said in a statement.

(I hope that the TUPAD program would continue in provinces affected by Typhoon Odette.  While this is a short term job, this is already a big help for people in areas affected by the typhoon, as they can earn money while helping their own communities recover from the disaster.)

DOLE initially said it has allotted P100 million for the cash-for-work program in the areas hit by “Odette.”

Escudero, who is eyeing a return to the Senate in the 2022 national elections, has been governor of Sorsogon for the past three years, during which the province was hit by several typhoons.

Sorsogon is located in the Bicol Region which is a known typhoon belt due to its location near the Pacific Ocean where most cyclones hitting the Philippines originate.

Escudero said that people in Sorsogon know the importance of TUPAD after the province was hit by Typhoon Tisoy (2019) and Typhoon Rolly (2020).

“The cash-for-work program in Sorsogon provided emergency employment such as clearing and segregation of debris, declogging of canals, recovery of materials and other activities required to rebuild communities,” he said.

“Odette” on December 16, 2021 crossed Surigao del Norte, then went towards Northern Mindanao, the southern parts of Eastern Visayas and Central Visayas. It then crossed to Western Visayas and then Palawan.

The cyclone left a trail of destruction. Reports from the National Disaster Risk Reduction and Management Council (NDRRMC) showed that “Odette” left at least 407 dead and around P24.5 billion in damaged infrastructure and agriculture.