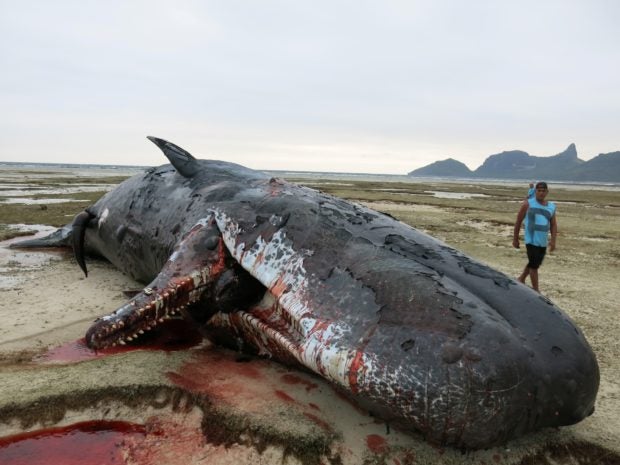 A sperm whale, which was most likely just passing through, was found dead on the coast of Dapitan City on Jan. 17. (Photo courtesy of Aileen Maypa)

DUMAGUETE CITY––Residents of Dapitan City in Zamboanga del Norte woke up Monday to see the biggest creature they had ever seen: a dead sperm whale.

The sperm whale, measuring close to 13 meters long and more than seven meters in diameter, was washed ashore, according to marine biologist Dr. Aileen Maypa of Jose Rizal Memorial State University in Dapitan.

Local fishers reported the cetacean stranding in the coast of Baylimango, commonly known as “beaching,” to City Agriculturist Cyril Patangan, who asked for assistance to identify the mammal and determine how to dispose of the carcass that could weigh as much as 41,000 kilos (about 102 live pigs).

“We then discussed a coordinated emergency action plan on how to respond to the whale stranding before the carcass decomposes or creates problems in the area,” Maypa said.

She said they also talked about how to proceed with official documentation, measuring, taking samples, and burying the beached whale during low tide by 5 a.m. of Jan. 18.

Virtually participating in the same meeting was international marine mammal expert Dr. Louella Dolar of the Center for Tropical and Marine Research based in San Diego, California.

Dolar, adjunct professor at the Silliman University Institute of Environmental and Marine Sciences in Dumaguete, confirmed the identification of the beached sperm whale, Physeter macrocephalus.

Maypa said the dissection of the stomach was needed to look for clues if any ingested materials had influenced its stranding.

She said it’s also possible the sperm whale, the largest toothed whale on the planet, got entangled in the fish corral (barriers acting as fishing gear), while feeding and passing through the area, got stranded in the area at low tide, and was not able to swim back to the deep.

Sperm whales normally live up to 70 years. But Maypa said this one may have only been 20 or so years, judging from its size of 12.92 meters.

“He was only a young adult,” she said.

Dolar recommended collecting tissue samples from the sperm whale to determine its DNA (the molecule that carries the genetic instructions of all living things).

“It’s important we learn from his DNA so we can find out to which population he belongs, where he came from, and the general migratory route of sperm whales,” Maypa said.