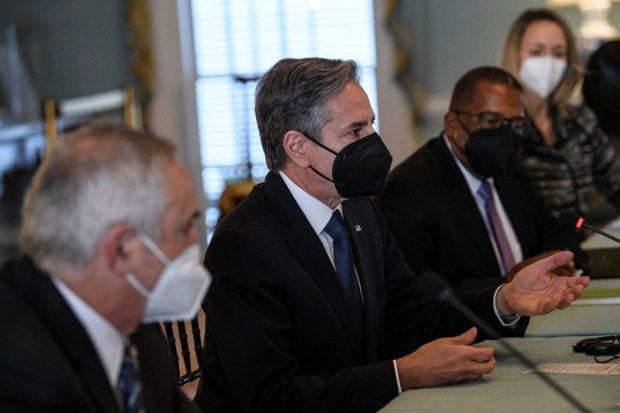 WASHINGTON — U.S. President Joe Biden’s top diplomat will seek to defuse a crisis with Moscow over Ukraine when he meets the Russian foreign minister in Geneva this week following visits with Ukrainian leaders in Kyiv and European officials in Berlin.

Secretary of State Antony Blinken will travel amid concerns voiced by Ukraine and its Western allies over the tens of thousands of Russian troops amassed in and near Ukraine.

“The United States does not want conflict. We want peace,” a senior U.S. State Department official said on Tuesday.

“(Russian) President (Vladimir) Putin has it in his power to take steps to de-escalate this crisis so the United States and Russia can pursue a relationship that is not based on hostility or crisis,” the official told reporters.

Russia denies planning a new military offensive but has made several demands and said it could take unspecified military action unless the West agrees to them..

Then in Berlin he will meet German Foreign Minister Annalena Baerbock and later the Transatlantic Quad, referring to a format that involves the United States, Britain, France and Germany.

A State Department statement said the discussions would focus in part on a readiness among allies to impose “massive consequences and severe economic costs on Russia.”

Blinken will meet Russian Foreign Minister Sergei Lavrov in Geneva on Friday to seek a diplomatic off-ramp with Moscow, the senior official said.

Blinken spoke with Lavrov on Tuesday and the senior official said the two decided in the call that it would be useful to meet in person.

Despite diplomatic engagements this month, Washington has yet to see Russia de-escalate tensions and Moscow could launch an attack on Ukraine at any time in January or February, the senior official said.

“We are now at a stage where Russia could at any point launch an attack on Ukraine,” the official said

A second senior State Department official on Tuesday voiced concern about Russian troops being deployed since Monday in Belarus close to its southern flank with Ukraine for what Moscow and Minsk say will be joint military drills.

The numbers of Russian troops are beyond what the United States would expect in a normal exercise and potentially could be used to attack neighboring Ukraine, the official said.

Biden has warned of severe economic consequences for Moscow if Russia invades Ukraine.

Baerbock, in Moscow for talks with her counterpart, on Tuesday said Germany was ready to pay a high economic price to defend its fundamental values in the Russia-Ukraine conflict.

Kyiv has sought weapons from Western nations to shore up its defense. On Monday, Britain said it had begun supplying Ukraine with anti-tank weapons to help it defend itself.