COVID-19 growth rate ‘accelerating’ in cities outside NCR Plus — OCTA 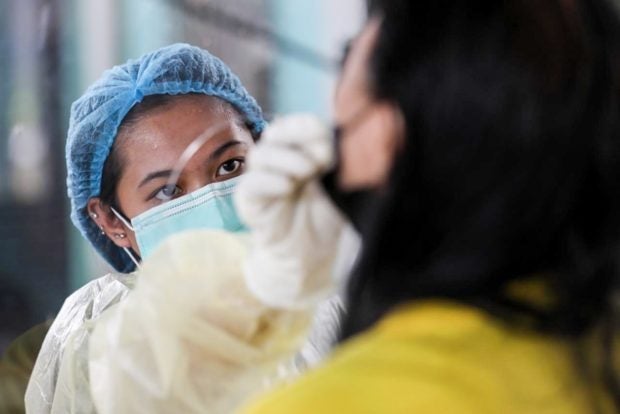 FILE PHOTO A healthcare worker conducts a swab test on a woman in Imus, Cavite. Image from OVP

MANILA, Philippines — While the growth rate of COVID-19 cases has “slowed down” in the NCR and adjacent provinces (NCR-Plus), there appeared to be an acceleration in the number of infection in other highly urbanized cities (HUCs), independent pandemic monitor OCTA Research said Wednesday.

“While growth rates have slowed in NCR Plus, they are still accelerating in many HUCs outside NCR Plus,” OCTA Research fellow Guido David said over Twitter.

According to David, Metro Manila registered only a 10 percent one-week growth rate of cases from January 12 to 18, compared to the previous week. Its COVID-19 reproduction number, or the estimated number of new infections from one positive case, also decreased from 2.67 from January 16 to 2.07 as of January 18.

HUCs all over the country showing new cases on Jan 18 (DOH data), 1-week growth rate, ADAR and reproduction number. While growth rates have slowed in NCR Plus, they are still accelerating in many HUCs outside NCR Plus. Reproduction no. in NCR at 2.07. @dzbb @allangatus @DZAR1026 pic.twitter.com/DTA8UlPUiF

But on Sunday, David also noted that actual COVID-19 cases in Metro Manila could be six to 15 times higher than the official numbers being reported by the Department of Health (DOH) in its daily case bulletins.

The DOH earlier acknowledged that the actual number of individuals suffering from COVID-19 in the country could be higher than what is being reported, since the daily bulletins do not include positive antigen tests.

The DOH also said it is too early to say that COVID-19 cases are already declining, following the statement of David that the spread of infections in Metro Manila appeared to be slowing down with the decreased daily growth rate of coronavirus cases.