newsinfo / Headlines
Headlines
NO CELEBRATION YET 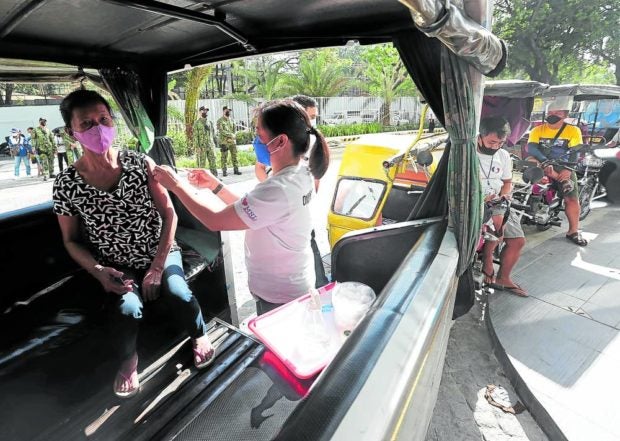 GETTING PROTECTION People get inoculated at the drive-thru vaccination site at the compound of the newly built Bagong Ospital ng Maynila on Monday. The 10-story, 384-bed capacity hospital, set to open in June, is expected to help ease the load of other medical facilities in Manila amid the pandemic. —MARIANNE BERMUDEZ

MANILA, Philippines — The independent pandemic monitor OCTA Research on Monday said the spread of COVID-19 cases in Metro Manila, suspected to be driven by the more transmissible Omicron variant, appeared to be slowing down, but cautioned that data in the coming days would determine if the infection was nearing — or has reached — its peak.

Speaking at the Laging Handa public briefing, OCTA fellow Guido David said that as of Sunday, the daily growth rate of cases in Metro Manila had slowed down to negative 1 percent compared to the previous week when the rate ranged from 11 percent to 15 percent.

“But then again, we can’t celebrate yet, so to speak. When the peak will happen, we can’t tell yet. We will wait within the next few days or the next week, because if the number of cases [will still be] lower, we really can say it (growth rate) is declining,” he said.

“We are optimistic that the number of cases in Metro Manila may already be going down and this is based on the trend that we saw in South Africa where, after two weeks of increase, [the case count] started to decline,” he added.

While David sounded optimistic, he also warned against being complacent.

“While this trend is encouraging, suggesting the possibility that cases in the NCR (National Capital Region) have peaked, the possibility still remains that visibility of the situation in the NCR is clouded because of limitations in testing,” he said.

“We need to monitor the trends in the NCR over the coming week to see if cases will decrease further,” David added.

David also said the reproduction number—or the average number of persons a sick person can infect—in Metro Manila was around 2.67 percent, compared to 6 percent last week, while the positivity rate—or the percentage of tests conducted that came out positive for COVID-19—slightly went down from 54 percent to 51 percent. A reproduction number of less than 1 and a World Health Organization benchmark positivity rate of 5 percent or lower indicate that virus transmission is controlled.

“I would say it’s a good sign because all our indicators also went down. In the meantime, we should continue what we are doing, and comply with minimum public health standards like wearing face masks and social distancing, as well as avoiding unnecessary travel, and getting vaccinated because these will help make the trend to go down,” he added.

David said the rate of recoveries was also expected to be faster because the shorter incubation period of Omicron meant faster recuperation, especially among the vaccinated. This was the reason why the Department of Health (DOH) shortened the quarantine and isolation periods for vaccinated persons who got COVID-19 but were asymptomatic or close contacts of COVID-19 patients.

He said Octa would continue to observe the trend in Metro Manila in the coming days so that the group could make better projections.

However, David said if the entire country would be considered, the peak might come as late as the end of January because even if infections were declining in Metro Manila, the cases in other regions were continuing to rise.

“But it is possible that in the National Capital Region, Cavite, Rizal and Bulacan, the peak is approaching or we have already reached it,” he said.

He said areas with increasing rates included La Union and Pangasinan in Ilocos region, Benguet in the Cordilleras, parts of Central Luzon, all regions in the Visayas, including Tacloban City, and even Mindanao, including Zamboanga City and Davao del Sur.

He said the vaccination drive in the provinces should be accelerated so that there would be fewer severe and critical cases similar to Metro Manila.

“It’s true that even if the number of cases is high [in Metro Manila], very few end up in ICUs (intensive care units) and even our hospitalization rate is low. We’re expecting that deaths will be low because many of those who got COVID-19 so far are vaccinated,” he said.

On the DOH’s modification of its testing and contact tracing protocols, David said it was “understandable” because with limited resources amid the surge of cases, the adjustment of management strategies was necessary.

David recommended that the DOH conduct random tests, such as the one being done for the Metro Rail Transit passengers, and continue to prioritize testing those coming from the vulnerable sectors.

The DOH on Monday reported 37,070 new COVID-19 infections, slightly lower than Sunday’s 37,154, although this was the seventh day in the past week that daily new cases exceeded 30,000.

The DOH reported a 46-percent positivity rate based on 77,410 people who were tested for COVID-19 on Saturday.
Monday’s case bulletin showed 290,938 active cases.

The DOH said 30 percent of ventilators available for Metro Manila COVID-19 patients were in use, against 22 percent for the whole country.

Twelve laboratories did not submit data to the COVID-19 Document Repository System, according to the DOH. INQ