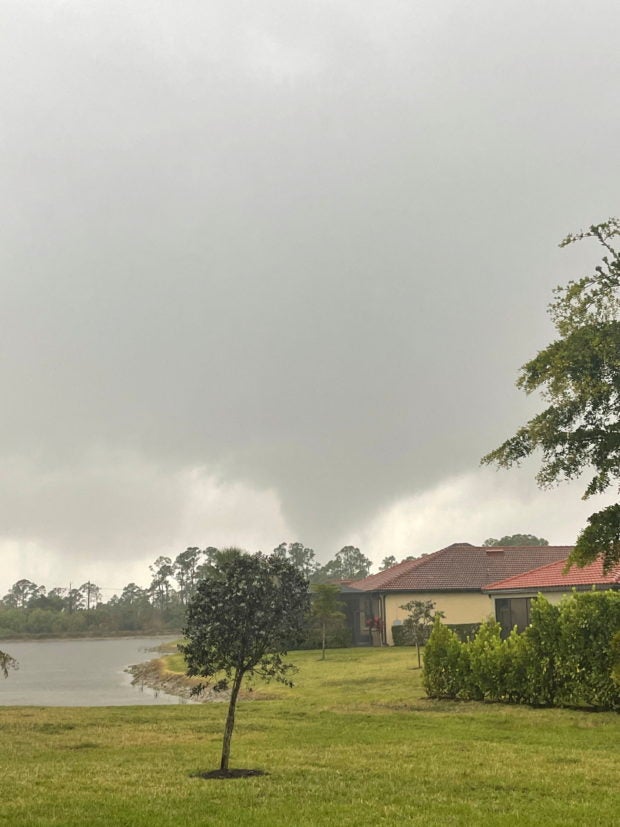 A tornado is seen in Naples, Florida, U.S. January 16, 2022 in this picture obtained from social media. @jrmozer5 via REUTERS

WASHINGTON — A major winter storm slammed much of the eastern United States with snow, ice and high winds on Sunday, causing widespread travel disruptions and power outages on a holiday weekend.

Winter weather alerts stretched more than 1,000 miles (1,609 km) from Alabama to Maine, with the governors of Georgia, Virginia, North Carolina and South Carolina all declaring emergencies due to the storm.

In North Carolina, where some regions saw record snowfalls, two people died Sunday when they lost control of their car in Raleigh.

The highest snowfall totals were expected along the spine of the Appalachians as well as across the lower Great Lakes.

The storm made its way through the Mid-Atlantic region toward New England on Sunday night, bringing snow that is expected to change to ice, sleet and eventually rain, the National Weather Service said.

In Canada, the storm is forecast to dump between 20-40cm (8-16 inches) of snow through Monday morning over parts of southern and eastern Ontario, the Canadian province that shares part of its border with New York state, the government weather agency, Environment Canada, said.

The inclement weather hits just as Ontario schools were set to reopen for in-person classes on Monday after the winter break was extended because of the highly contagious Omicron coronavirus variant.

More than 3,000 flights within, into or out of the United States were canceled on Sunday, and over 8,000 flights were delayed, according to FlightAware data.

American Airlines Group Inc saw more than 660 flight cancellations. More than 90% of the flights into and out of Charlotte Douglas International Airport in North Carolina, an American Airlines hub, were canceled, the FlightAware website https://flightaware.com/live/cancelled showed.

American Airlines said it is allowing customers affected by the weather to rebook flights without a fee.

Toronto, home of Canada’s busiest airport, is set to see accumulations of 15 to 20cm of snow.

This was a long weekend for most people in the United States as Monday is Martin Luther King Jr. Day, a federal holiday.

“If you’re able tonight and tomorrow morning, stay home and off the roads,” Kemp said on Twitter. “It’s going to be treacherous in a lot of parts of our state.”

If you’re able tonight and tomorrow morning, stay home and off the roads.