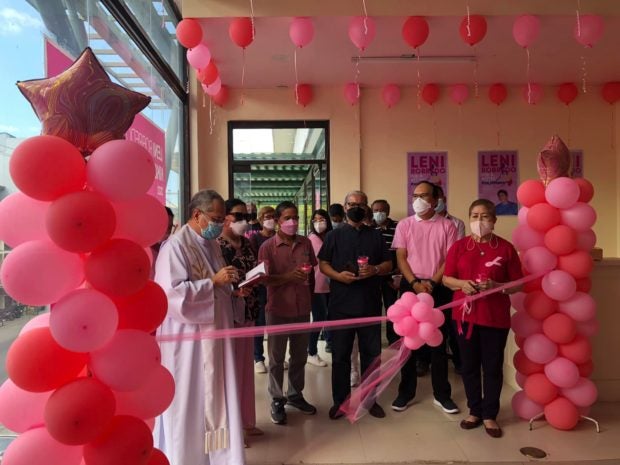 SAN FERNANDO CITY, La Union—Volunteers supporting the tandem of Vice President and presidential aspirant Leni Robredo and her running mate, Senator Kiko Pangilinan, are leading the charge in La Union province, a part of the ‘Solid North’, as they opened Jan. 15 their second volunteer center.

The newly established volunteer center located at the heart of La Union’s capital city of San Fernando will serve as the provincial headquarters for at least 18 volunteer groups led by the Robredo for a Better Philippines (RBP), Robredo’s People Council, and 1Sambayan La Union.

Ives Nisce, RBP convenor, said in a message during the event that he was glad to see that he was not alone in supporting Robredo and Pangilinan in the region.

“I thought it was a lonely and long road, but as I see you all today, it is no longer just lonely, [but could be] just a long [battle],” he said while addressing a group of volunteers present during the launch.

The first volunteer center is also located in San Fernando City and was launched Dec. 4. The two are the first established volunteer centers in the Ilocos region, where “Kakampinks,” or supporters in the province could come together to plan and implement local initiatives in support of the candidacy of Robredo and Pangilinan.

In a video shown during the event, Pangilinan shared that Robredo pushed to campaign in the region in 2016 even though it was a known Marcos bailiwick.

He emphasized how the region delivered for Robredo, and a portion of the 260,000 more votes she garnered made her win the vice-presidential seat in 2016.

(You are one reason why VP Leni won her candidacy in 2016. And you may likely be the reason she would win again in May.)

Pangilinan highlighted in his message the contribution of northern Luzon in agriculture. He vowed to bring more funds to the sector and to fisheries, and intensify support to farmers, as it could be key to fight poverty and hunger in the country.

In a video message, Robredo also thanked the volunteers, who had become her source of strength and inspiration to run for the 2022 polls.

(It is inspiring and brings so much strength to see the continuing increase in the number of people like you who join us in this fight.)